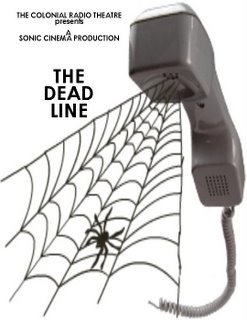 For our XM listeners, CRT will be releasing a new series come January! It's called THE DEAD LINE and deals with mystery and suspense! 15 great episodes produced and written by Jack Ward of Sonic Cinema in Halifax. We don't normally release works by other producers (have only done so once before), but I loved Jack's stories and wanted to give them a larger audience.

Also on XM in January, look for our new production of Robert Louis Stevenson's TREASURE ISLAND. Starts next week I think.

While those are playing on the air, we start production on FATHER BROWN MYSTERIES, which star J.T. Turner! Awesome scripts by M.J. Elliot. We have one in the can and 15 total are planned.

DIBBLE closes in NYC this Saturday night. I had hoped to attend the last performance, but I am behind schedule with SOMETHING WICKED and need to keep working on that (its already late - but its gonna be a good one!)

We are thrilled at the opportunity.
And look forward to better and better productions to send you!

All the Best in this Season,
Jack

P.S. I think we should post this blog on the SCP website and SS... don't you think?