PERRY IS OFF AND RUNNING 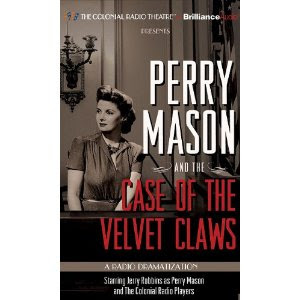 Our recent CD release of PERRY MASON AND THE CASE OF THE VELVET CLAWS seems to be a popular title and getting some good reviews - except for a few folks who are having trouble with a Perry not played by Raymond Burr, but all in all, good reviews! One thing that is cracking me up are comments that I am TOO YOUNG to play him! One guy said I sound like a "youthful gangster!" Well, considering that I am 50 years of age, anything "youthful" that is mentioned about me is a GOOD thing (William Shatner told me the same thing after he heard me in another program - said I was too young sounding for the role! Made my day!!)

Some of the reviews do not like the fact that we have a courtroom gavel hitting a desk for the scene changes; I thought this would work best (a direct steal from LAW AND ORDER), but some folks think it is a door slamming, and a few thought it annoying. One suggested we use a music bridge.

The trouble is, we are faithful to the books, and the books change scenes at a rapid pace. Because the shows are fast moving, I thought (and still do by the way) think that a music score would be choppy, and also, would take a lot of time. I feel pretty safe in saying that CRT has one of the very best music departments in the modern Radio Theater world, and Jeff is fully capable of scoring a PERRY MASON adventure. The trouble is, we are doing a series of them, and if he were to score them he would be working the entire year on PERRY MASON alone (And we Have other shows to get out the door as well). I thought PERRY had that 1930's feel to it when most movies and radio shows of the day didn't have underscoring throughout. It also moves very fast. I think it works fine as it is. To use short music bridges between scenes (as was suggested by one armchair producer) would become just as annoying over time.
So, the gavel effect may not work for everyone, but so far, the majority doesn't seem to mind it at all :)
Everyone has their own opinions, and that's fine. I certainly don't like everything I see, or listen to, and playing an iconic role like MASON will certainly draw comparisons. If one listens to our show and hears my voice, but is picturing Raymond Burr, it's not going to work for you.

But, we will continue to bring these great stories by Erle Stanley Gardner to radio, and we will hopefully do justice by them, and hopefully they will be a happy and pleasant diversion for the listener for an hour and a half or two.

PERRY MASON AND THE CASE OF THE SULKY GIRL will be released by BRILLIANCE AUDIO on FEB. 15th.
Posted by JR at 12:05 PM

you AREN'T a youthful gangster?