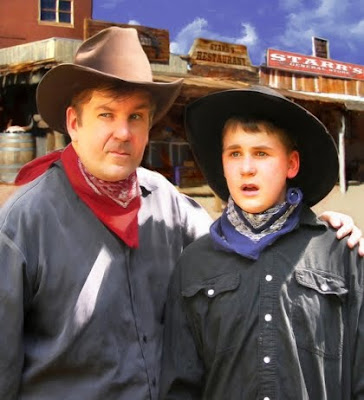 As we're gearing up to record the final episodes of our western series POWDER RIVER, Brilliance Audio is gearing up to begin releasing the series on CD, starting with Season 1 on November 15th 2011.
It's been seven years since we started the series and I am blown away with how well it has done and the response from our fans. There is not a week goes by that I do not receive email about it.

The original CD Release by our former publisher, was doomed from the start, with the CD's priced at an outlandish $54.00. I mean - come on. The new release will offer an entire season for $9.99 (hard case copies for Libraries will cost a little more).
Jeff Hayes will be designing the cover art for all 5 seasons, and to start it off, completed the Season 1 design, pictured here, with Britt (yours Truly)and Chad MacMasters (Derek Aalerud) in front of Starr's General Store, in Clearmont WY.
Posted by JR at 2:08 AM