You know, when I heard Barbra was touring again (Like Sinatra, MANY farewell concerts over the decades) - I was ALMOST tempted to see her on her Boston Stop. I mean, there is no doubt she is the last of the true "legends" of Show Biz. Can you imagine J-Lo or Ms. Spears still selling out concert halls 40 years from now? It's impossible - because show business doesn't have the foundation anymore to build REAL and LASTING stars. It's all "celebrities" these days. Streisand sang with Judy Garland, Ethel Merman - she was directed by Gene Kelly and Vincente Minnelli ... and she has that voice! But I had a hunch that this would be a political gathering, not just a concert. Lately it's almost impossible to go to a concert without hearing the performer throw out their political views from the stage. K.D. Lang at the South Shore Music Circus slam dunks the administration and blasts the President from the stage ... then Tony Bennett came out for the second half and sang his hits, gave a classy performance,brought the house down, stuck to his legend and not his political views (whatever they may be) and showed everyone what a REAL star is.

That's what I'm talking about here. Now, I don't happen to fall in with Babs'or K.D.'s views, but I wish that these performers would just PERFORM. If you want to go into politics - then go into politics! But I do not want to spend $75.00 to hear K.D. tell me what she thinks of the way the US is being run ... or in Bab's case, $750.00 (thats the top ticket in Boston)!
I have no problem with people speaking their views. If she wants to talk about them on a talk show, or interview - I got ZERO problem with that. But in a concert - I just dont think that's the place. Maybe I'm too old fashioned. And folks - I say this about ANYONE, from ANY party - even the party I belong to! When I go to see a star, I want to hear their songs, not their views on politics. I can go to a rally or a debate for that.
So, when I heard Babs was going to tour, I thought "Hmmmm .... she IS a legend ..." but then I figured I'd have to listen to her political views, so I decided not to shell out the $$$.$$ I'm glad I did, for it seems she has a Bush impersonator as her opening act. I ain't got not problem with that - but not at a concert where I spend $750.00 She is taking the money and turning it over to her charities, which I think is a very noble thing she is doing - but maybe she should have just toured with "A forum with Barbra Steisand." See, she could have filled these arena's with people wanting to hear her political views - and that would be fine. There is a place for everything.
I don't want to use my blog as any kind of political debate forum, and I'm not picking on Babs per-sey, but I just wish these stars would keep their views off the concert stage where we pay to hear it, and that goes for stars of ALL political parties!


Streisand Mocks Bush on Opening Night
Barbra Streisand peppered the opening night of her comeback tour in Philadelphia, Pennsylvania, with a series of digs aimed at President George W. Bush. The 64-year-old is a staunch Democrat and is still appalled that Bush was elected to the most powerful position in the world despite doubts over the crucial result in Florida in 2000. The concert at the Wachovia Center featured a political satire sketch where an actor playing the Republican president reeled off lines including, "I'm concerned about the national debt, so I'm selling Canada," and, "If I cared about the polls I would have run for president of Poland." Streisand has come out of retirement for a series of shows to raise money for a charitable foundation which supports a number of environmental and educational causes.
Posted by JR at 12:05 PM 1 comment:

THE HEADLESS HORSEMAN RIDES AGAIN! Yeah, I know I blogged this the other day,but SLEEPY HOLLOW is getting some great attention in stores and we're excited about it! You can order it from AMAZON, or BORDERS, or BARNES AND NOBLE - and it's also on shelf at B&N and Borders (so they say). Oh! And if you live in JAPAN - we got you covered! Anyway, that's that.

It's odd how many of these online sites take forever to get the cover art posted! Everything takes so much time in this biz. Craig Slaff in NJ painted the fantastic Headless Horseman painting for us, and then Blackstone's art dept. did the incredible cover design! It's one hot lookin' CD!!

We recorded two more PHIL BYRNES mystery episodes last night. Before the session I met up with J.T. (currently a smash hit as Ben Franklin in the Boston turn of 1776 at the Lyric), his some James, and Diane Capen, at the China Cuisine in here in North Reading (An AWESOME restaurant), the we recorded. Next Monday we record the first FATHER BYRNES episode!!
Posted by JR at 9:11 AM No comments: 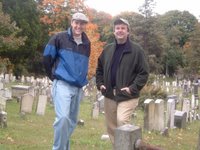 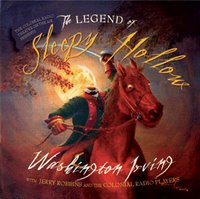 My favorite month of the year, without question! Something about the chill in the air (not cold, not freezing - a chill), and the leaves turning bright yellow, orange, purple ... pumpkins in fields .... October in New England! Busy month of recording ahead, AND today is the release date for our Award Winning THE LEGEND OF SLEEPY HOLLOW! It seems like just a few weeks ago I went to Tarrytown New York with Nick Aalerud (that's us in the photo at the Sleepy Hollow cemetery - Nick is on the left. Thank God we don't look like Jake and Dibble in real life) to do some research on the then up-coming production. It was a trip worth taking, as I got truly inspired for the show.
For instance, our play opens with ghostly voices chanting names and dates from gravestones ... and all those names and dates were taken from the stones in Sleepy Hollow cemetery, next to the Old Dutch Church (which is featured in Washington Irvings story). Also, one evening, we listened to an actor read the entire book - in the Old Dutch Church - and that was something! Lit by candlelight - and looking out the window over the famous graveyard where the Headless Horseman dwells - and the full moon shining outside the large glass windows ... well ... let me tell you that by the time I got home I was ready to write the script for our radio play.

So, two years later, the show is being released nation wide in a double CD set and you should be able to find it at Borders and Barnes and Noble, and online everywhere. I think it's one of our very best productions, and I hope people like it!
Posted by JR at 1:38 PM No comments: