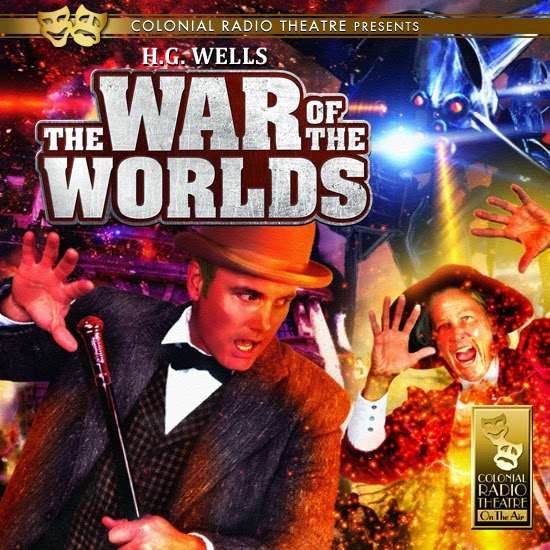 
It was in early July, 2006, when Ray Bradbury asked us to do SOMETHING WICKED THIS WAY COMES. I once again asked Nancy Curran Willis to direct (she had directed our first production for Ray, DANDELION WINE). Ray emailed me the script from his SWTWC's stage version, I made some sound and music tweaks, set a recording date for the end of August, and we had auditions in Ipswich. This is where we found Anastas Varinos and Matt Robertson. We cast them in the two leads - but the six other kids who showed up were really, really good as well. On the ride home from the audition, I remembered J.T. Turner a few weeks before, talking about Ray's book THE HALLOWEEN TREE - which I had never read. We had the right number of kids for that story.

I called Ray and asked him if he had a script for that one. I'll never forget him saying to me: "No - but this is what you do. Buy the book, get a red pencil, cross out everything but the character dialog, and you'll have your script!"  And that is exactly what I did.  This was August of 2006 when the script was completed, and on Dec. 2, 2006, we recorded THE HALLOWEEN TREE. The session took the entire day, and we were on the clock for it, as many of the boys were appearing in various Christmas shows in Boston and had to be downtown  for the evening curtains. Our cut off time was not negotiable - we had to finish on time - and it was a big script. Not an easy task - but the kids were pros and we got it done.

Nancy got some amazing performances out of the kids. I remember when (in the show) they introduce who they are to each other...  "MUMMY" "WITCH" "MR.DEATH"  - and Nancy's direction was "I want you to say who you are the way your character would say it."  And wouldn't you know, the kid who said "MUMMMY" sounded like a mummy!?  I know a mummy can't speak, but if he did, I bet it would sound like the kid you'll hear in the show!

The production did not go into editing until a year later. I wanted to wait till we could upgrade our music program. THE HALLOWEEN TREE needed an extensive score, and if there was a better music program out there - I wanted it.  So we saved for it, and got it. It was not easy sitting on it for a year; I knew we had something special.


There was some criticism when the show was released due to the fact that there are a few songs in the production. We always stick to book at CRT, and in the book THE HALLOWEEN TREE,  Ray writes how the tree sings - and he even wrote the lyrics in the book. Jeff used those same lyrics when he composed the songs (He was excited to see the sheet music "Music By Jeffrey Gage, Lyrics By Ray Bradbury."
THE HALLOWEEN TREE was released on October 1, 2008, two years after it was recorded, by Blackstone Audio. It won the Ogle Award for Best Fantasy production of 2008. Blackstone did not enter it for an Audie consideration, which was a shame. I think we had a chance that year.

Everything just came together on this one: the cast, the editing, the music. It continues to be a popular item each Halloween Season and a best seller for Bradbury audios - even after six years in release.

The kids are all grown up now. Four of them that I am still in contact with are in college, another went on to star in movies and TV... the others I have lost contact with.

Ray Bradbury was an incredible friend to Colonial - and he trusted us with four of his most iconic works - to which I am forever grateful.

And I still have the book - with all the red lines through it.
Onward!
Jerry R

RAY BRADBURY'S THE HALLOWEEN TREE on CD - Amazon
Posted by JR at 2:46 AM No comments: