Has it really been a year 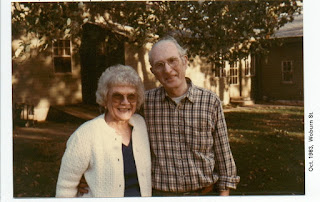 I lost my Dad one year ago today. This picture was one I took for him the day he bought his new camera; My Mom passed away in 2001. It's one of my favorite pictures of them. Their house was paid off, he had just retired, and everything was good. Very, very good. These were two wonderful people.
Posted by JR at 9:38 AM 1 comment:

We have two brand new episodes of The Father Brown Mysteries available! The first, is Episode 9, The Oracle of the Dog, and the second is Episode 10, The Miracle of Moon Crescent.
These shows are being released on a new download site, Lulu.Com. After a week or two, we'll release them to our other sites, such as Spoken Network. The sound quality on Lulu is great - just like the original masters! Actually, episode 9 has been out for a few weeks and will debut on Spoken Net either later today or tomorrow.
For now,
check out

EPISODE 9 THE ORACLE OF THE DOG.Father Brown is staying as the guest of a retired colonel when his host is found dead, stabbed with a narrow blade, but no murder weapon. The police inspector gathers all the suspects together, but Father Brown has the answer.


Episode 10 THE MIRACLE OF MOON CRESCENT.A man is found hanged from a courtyard tree, despite no one ever seeing him leave his high-rise office.
Posted by JR at 12:12 PM No comments: