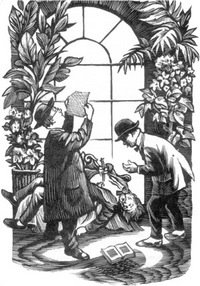 Recording begins Monday night on FATHER BROWN. We did an episode a few months ago, and now we're set to record seven episodes, thru Feb.12th. This is a milestone show in CRT land. It will be the first program (s) with a music score by someone other than Jeff Gage. Kevin McLeod has scored the tracks for this series, and Matt McLaren is producing. Matt did a great job posting the PHIL BYRNES mini-series, and he did a great job editing FATHER BROWN #1.

Also, we will be having many new voices, as I can't seem to round up enough CRT players to take part (which was the case with POWDER RIVER Season 4 as well). So - to get around this, for the first time, I am casting voices from around the world via a voice casting forum.

Not sure what's going to happen with POWDER RIVER on the W0KIE Network. With Dean's passing, his Thursday Night show will most likely be replaced by a new program, and I doubt we will be on air for PR - Season 4. All of you who listened in on Thursday nights - keep an eye out for the Download release of the episodes this March. Won't be the same with Dean introducing them.
Posted by JR at 1:58 PM No comments:

Back in September, after a PHIL BYRNES recording session, Hugh Metzler, Diane Capen, JT Turner, James Turner and myself, recorded a script for the DARKER PROJECTS people - called THE CARNEGIE STONE. It turned out pretty cool! Here is the link where you can download it for free
Posted by JR at 4:02 AM No comments: