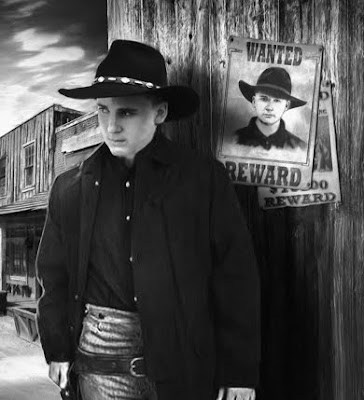 We released THE MARTIAN CHRONICLES on Tuesday, which is exciting (a review from Bradbury Media appears a few days ago in this blog).

There is not a week goes by without my getting an email asking about POWDER RIVER, and when we are going to do more episodes. I'm not kidding, either. Just this week we got a really nice email forwarded to us from our friends at IMAGINATION THEATER where PR runs the first Sunday of the month. In radio, we play to an audience we never see; when letters and emails come in from folks telling me how much they love POWDER RIVER, it really warms the heart.

The picture for this blog entry is POWDER RIVER Co-Star Derek Aalerud in a great illustration by Jeff Hayes.

On Nov.15th, Brilliance Audio will release POWDER RIVER. Season 1, followed by Seasons 2,3,4,and 5. The Episodes will begin airing on our Sirius XM Book Radio show in November as well.

Tonight, the cast gets together again to begin Season 5, which will include 15 new episodes. Most have been back for other shows over the years, but there are a couple I have not seen since the last session in 2006 - so it will be a nice time I'm sure.
Posted by JR at 3:11 AM No comments: