Did you know that, according to presidential etiquette, when a US President leaves office, he is supposed to be addressed by the highest "rank" or position he served before he took office? So, by rights, former President Clinton should be called Gov. Clinton. Useless information I am sure - but its in the books! Nothing to do with radio theatre though.
Posted by JR at 11:17 PM No comments:

CRT does the WEST 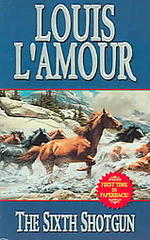 We've done about 70 radio plays set during the old west (most of them Powder River episodes, but lets not forget Little Bog Horn, The Bozeman Trail, Advance and Retreat, etc.) All that training in the dust and sun has paid off, as we are very happy to announce that we will be producing some titles from the classic western stories of Louis L'Amour - without question the only author who literally owns the genre in terms of book sales (over 270 million sold)! This is BEYOND exciting, and a great honor as well. Our first production will be THE SIXTH SHOTGUN, and the script is already underway! The show will most likely be released in the summer - but then again, that's a total guess (we dont decide when shows get released, the publisher does). I never thought I would see the day when the legends like Ray Bradbury and Louis L'Amour would appear on the cover of a CRT show ~ a lot can happen in 12 years!
Posted by JR at 12:55 PM No comments: