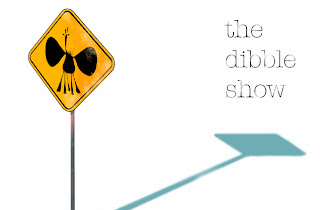 Well, after almost two years of talk and development, I can finally mention that CRT's THE NEW DIBBLE SHOW is in development as a TV series! A production of "The House of Cool" in Toronto, Canada, the studio was formed by Ricardo Curtis. Ricardo has worked on such pictures as THE INCREDIBLES, THE IRON GIANT, ROAD TO EL DORADO, and MONSTERS INC. to name a few. These are world class animators and we are very fortunate to have crossed paths with them! In just a couple of weeks, the series will be pitched to the studios, and we keep our fingers crossed that they (the studios) like the show. You can check it out at their website HERE Click on "The New Dibble Show" to see some drawings.

Thanks to all of you who came to see BARRYMORE this past weekend! It was great seeing you after the show, and I had a great time working the QP stage once more. I really love performing this great play by William Luce (who sent a FANTASTIC email!!) andI am looking forward to playing it at the end of the month at the West End Theatre in Gloucester, MA - right at the sea shore (I just hope a fog horn doesnt chime in during the 'to be or not to be' bit!).
Posted by JR at 8:34 PM No comments: 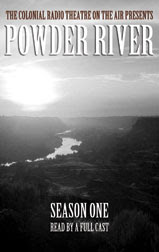 The first season of our POWDER RIVER series is being released this week from BLACKSTONE AUDIO It's a little on the pricy side (plastic clam shell packaging), but they should be releasing a value pack edition soon.

These are the first 15 episodes of a series I thought would end with episode 15; but that was 60 episodes ago! These have been re-mastered and they sound GREAT for their CD debut! This is the release schedule;

And guess what? Season 5 begins taping in June! 15 episodes are planned.