Getting ready to roll out new programs this Spring and Summer

As our 17th Season continues, we are excited about some new productions that are getting ready for release this spring and summer.
First out the door is the continuation of our western series, POWDER RIVER. 30 new episodes have been recorded, and they begin airing on March 9th on Sirius XM. 15 eps will run thru June, making up season 5. Season 6 begins Oct.5th.

VINCENT PRICE PRESENTS - Vol. 3, includes another "Dr. Phibes" story with The Seven Lives Of Dr. Phibes, as well as The Effigy, Trapped, and The Best In The Universe. This is becoming a popular series, and these new tales of terror will be released March 6th.

WRATH OF THE TITANS will be released on March 30th - same day as the movie! We are currently running this program on our Sirius XM show in episodic format, but to hear it in all its stereo unedited glory, check out the CD or DL!

TOM CORBETT-SPACE CADET is a fun production! Based on the Bluewater Comic from 2009, it's an exciting story with a great cast, and sparkling post production work by Seth Adam Sher. Release Date is May 16th.

RETURN TO TREASURE ISLAND is a new story by Gareth Tilley, based on the characters created by Robert Louis Stevenson. Anastas Varinos returns as Jim Hawkins, and Joseph Zamparelli once again becomes Long John Silver, in this swashbuckling tale we first aired as a special on Sirius XM last Thanksgiving. Release Date is June 11th.

ALLAN QUATERMAIN AND THE LORD OF LOCUST. One of CRT's most successful releases has been KING SOLOMON'S MINES. In this action-packed sequel, Based on the exciting Bluewater Comic by Clay and Susan Griffith, Allan Quatermain journeys deep into the unexplored, mysterious forests of equatorial Africa to repay a debt of honor and avenge a wrong. He encounters the dangerous Lord of Locusts, Bwana Nzige, a slaver from Zanzibar. Release Date is July 9th.

TICONDEROGA is an exciting adventure set during the French and Indian War. Ticonderoga tells the story of Captain William Taylor and his Mohawk scout Degadawidah who are charged to escort Captain Carlton Campbell of the 42nd Highlanders through the dangerous lands of the Huron to Fort Edward, where the British are making plans to march on the French held Ticonderoga. Release Date is July 9th

JARREM LEE - GHOST HUNTER Vol. 2 will bow on July 9th with four new chilling and thrilling adventures, including The Disappearance of James Jephcot, The Terror of Crabtree Cottage, The Haunting of Private Wilkinson, and The Mystery of Grange Manor. Release Date is also July 9th.

And in-between these new productions we will be releasing some golden oldies, and more recent but not quite brand new productions on the Brilliance label, many of them for the first time on CD, including THE RED BADGE OF COURAGE, THE ALAMO, OLD IRONSIDES, LITTLE BIG HORN, THE FATHER BROWN MYSTERIES Vol. 4, POWDER RIVER Seasons 3 and 4.
Posted by JR at 9:40 PM No comments: 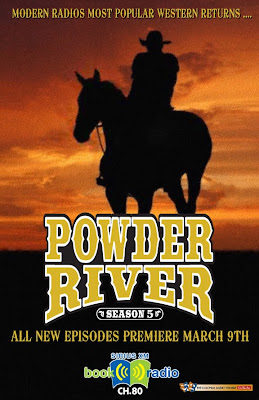