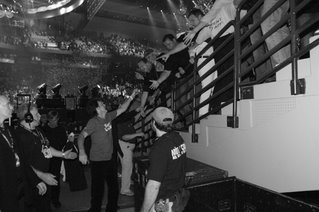 Busy Days, busy days. I got new XM progamming finished through the end of December; went out yesterday so that's all set for a couple of weeks. Today I'm going to be working on (and trying to finish) a script for Ray Bradbury that we are producing soon. worked an average of 20 hours a day this week - so I'm taking it slow this weekend.

Tickets for DIBBLE DOES CHRISTMAS IN NEW YORK! went on sale yesterday, so if you live in NYC or plan on being there in December - check out the show!

Our 1999 production of THE PLIMOTH ADVENTURE airs on XM Radio on Thanksgiving Day! This is the first national broadcast for this show that is now - yikes - seven years old! I can remember the AGONY in writing this script. I worked on and off for two years (mostly "off") and working from Gov. Bradfords 300 year old book "Of Plimoth Plantation." The final show is one of our shortest (for a feature), but went on to be a top seller for CRT. Jeff did a GREAT score for this one, incorporating actual songs from the period.

1) Does anyone really care about Tom Cruise and Katie Holmes getting married? It's everywhere. Seriously - do you care?? The guy cant even act! He just tilts his upper lip so we can see his teeth in every shot. TOM - you are no longer 17. Close the mouth and act your age!

Cruise fans - dont yell at me - you're right, I never thought much of him to begin with.

2)I think the new James Bond movie looks great! I stopped going to see them when they got silly. I miss Sean Connery's Bond - and this one looks promising.

3) I love the re-vamped STAR TREK - Original Series - with new effects! Outstanding! Too bad Scotty and Bones aren't around to see how cool it looks.

4) I love Pumpkin Ale. The pub ran out. Does that mean I drank too much? Every time I discover a new drink at this place, they run out a week later. Hmmmmmmm

5) I feel so bad for Paul McCartney. Heather was a bus accident waiting to happen - and I said this YEARS ago! paul - a word of advice - NEVER marry a woman who tells you she never heard of the Beatles. That is a HUGE Red Flag!!! I love Paul and I hope he rebounds from this mess without too much finanical loss (The picture on this blog is Macca leaving the stage in Boston)

6) I could listen to Beatles music forever (well, so far, I HAVE been!)