Now, how cool a year has this been so far? Our third Bradbury production about to be released - we just worked with a STAR TREK legend, and now, we are embarking on a project with another legend - this one from Broadway - the great William Luce (remember the Belle of Amherst, anyone?). Mr. Luce is working with CRT to bring his amazing work, BARRYMORE, to life as an audio drama. I have played JB in Mr. Luce's play onstage over the past six years, and I am BEYOND thrilled to be recording it. Mr. Luce is also writing some new scenes to make the transition to audio clearer, and he has been just fantastic to work with. I am hoping to perform the show onstage again next spring/summer. If you know of a good theater in your town - let me know, and we might pay you a visit!
CRT's BARRYMORE will record Aug. 20,21, and 23rd, and we are hoping for a Christmas release - but more on that later.
Posted by JR at 10:40 AM 1 comment: 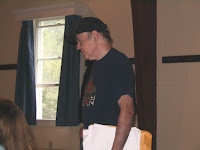 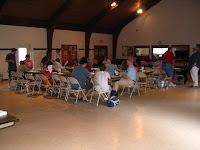 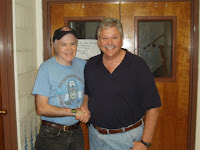 On Aug. 2,3 and 4th, CRT recorded Walter Koenig's Sci-Fi epic, BUCK ALICE AND THE ACTOR-ROBOT in Ipswich, MA. Mr. Koenig flew into Boston's Logan Airport on Friday evening, and arrived in Ipswich (at the beautiful Ipswich Inn B&B) around midnight. The show was, without question, CRT's biggest undertaking to date. Sure, we have recorded large productions before, but they were all done over many sessions, spanning several weeks (CAPTAIN BLOOD was done in 8 sessions); and here, we did it all in three days.
Each session day ran for 10 hours - pretty much non-stop.
35 Actors on site.
20 hours of sound was recorded!
Chris Snyder, our chief editor since 2006 flew in from Arizona and handled the engineering. Mr. Koenig directed the CRT players, and our music director Jeffrey Gage was on site as well to get a feel for the show and the music that will be needed.
Many CRT vets were in the production, including Bill Hammond, Joe Zamparelli, J.T. Turner, Amy Strack, Diane Capen, Marcia Friedman, and many, many more. We also had some new performers joining us for the first time - including Jerry Rudasill (who came up from PA), Jonathan Zungre (from NYC) who is also the new Chekov in the popular fan film series, STAR TREK - PHASE 2, Cydney Newman, Jordan Rich of WBZ Radio, and ken Carberry from Boston's Chart Productions.
This is going to be a mammouth production to post - but we are up for it! I know we got a good one here, and I am very excited to get it out and into the publics hands! Walter Koenig, best known as Chekov in the original STAR TREK series, and seven of the motion pictures that followed, was amazing to work with, and I know his fans are going to love this production. I'll keep you posted on the editing progress!
Posted by JR at 10:18 AM No comments:

CRT's THE HALLOWEEN TREE gets an early start

Although the CD release date isn't until October 1st, Blackstone Audio has released our production of Ray Bradbury's THE HALLOWEEN TREE to several download sites; AUDIBLE.COM, and POWELLS BOOKS are two of them. I think iTunes has it as well, and Audio Editions, but not sure. Check it out! It's a fun show!
Posted by JR at 10:01 AM No comments: