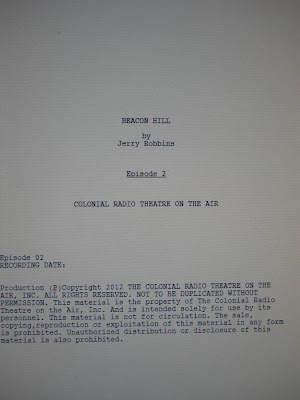 The coffee machine is on and set for 12 cups and I am in the commando chair getting ready for a night on Beacon Hill with the super wealthy and dysfunctional Prescott family. We start production this coming week and I am looking forward to this series, or should I say "mini series." We are doing eight - one hour episodes, and they will be released in two sets of 4 episodes each.

If the show does well, we'll do another eight. I'm having a good time writing this one. The plan is to go on the air at the end of December, and a CD / DL release for early 2013 (unless the world ends in December, that is.)
In the meantime, I have been surfing the web, checking on all things CRT. The crook at Pirate Bay is still stealing content and putting up in torrents for all to re-steal. I guess it's his way of screwing the major companies like Warner Brothers and Dreamworks. He also screws the little guy, like me. But he doesn't care - because like most people who break the law and have no respect for other people's property - he could give a damn. The only good thing about it is, a lot of torrents carry nasty bugs and viruses, so at some point, the people getting the illegal downloads will get more than they bargained for :) Poetic Justice.

Some guy "reviewed" our POWDER RIVER series on his blog - gave it glowing notices. Then a few months later changed the review and basically said we didn't know what we were doing. Oh, I think I know why this review was re-written, but I won't embarrass anyone by saying why I think that way (because more people read my blog than his) ;) While he may think the show sucks, the reality of it is, POWDER RIVER is set for two more seasons and sales are fantastic!! Not bad for an Eastern Greenhorn, eh?

On the plus side, we released a new show this week, TOM CORBETT - SPACE CADET, and for the first time on CD, a production we did twelve years ago, THE ADVENTURES OF OLD IRONSIDES. Yes, there is indeed something to be said for longevity.

Do you know what is awesome? We've got 2 shows in the top 100 Best Sellers of Audio Drama on Amazon that have not even been released yet! POWDER RIVER SEASON 4 and LITTLE BIG HORN (Both coming out on June 11) - 11 shows total in the top 100 :)

Finally, If you like POWDER RIVER, be sure to join the show's fan page!