Yep, we ask for your reviews here at CRT, but I must admit I was surprised to see a 1 star given to TICONDEROGA Season 3 on AMAZON because of an episode called THE WITCH - considered by the reviewer to be not acceptable for family listening. I'm sorry if you were offended; but every episode cannot be blood and thunder; witchcraft was a very serious and much feared thing in the 18th century; and I thought that it was a good story idea. The episode does not get into any black a...rts and it doesn't get preachy or have any hidden message -- in fact, people at the fort "surmise" she is a witch -- in the end, no one knows. The second part of the story dealt with Dagadawidah and the spirit world of the Native Americans - after writing over 50 episodes I thought it would be a good storyline for the character.


Again, if this offended you, I'm sorry. It was not my intention to stomp on anyones beliefs; I was just trying to tell a historical story true to the times it took place in. It's getting very difficult to actually write anything these days that does not offend someone, somewhere -- especially when telling stories that take place 80, 100, or 250 years in the past. I can take bad reviews, I certainly have a few of them, and I actually do respect the view and opinion of this listener -- but I just thought it mis-represented the season of episodes, giving the impression it's darker and deeper into witchcraft than it actually is. Cheers - JR

It's hard to believe that we recorded the first four POWDER RIVER episodes 14 years ago this month! Feb. 2, 2004 we taped THE PREACHER, BATTLE AT RICOCHET ROCK, TANGLED ROPE and THE LOST MINE --the first four episodes of our first season. 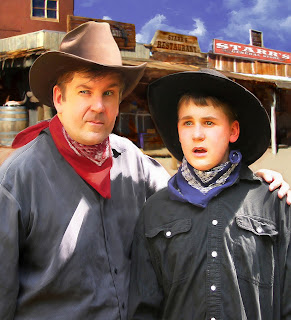 Jerry Robbins as Britt MacMasters and Derek Aalerud as Chad MacMasters in POWDER RIVER (2004)
Posted by JR at 2:49 AM No comments:

ON THE AIR tonight

COLONIAL IS ON THE AIR TONITE with POWDER RIVER - The Photograph/ and TICONDEROGA - The Huron Trail. 8pm Pacific, 11pm Eastern. LISTEN LIVE - ONLINE 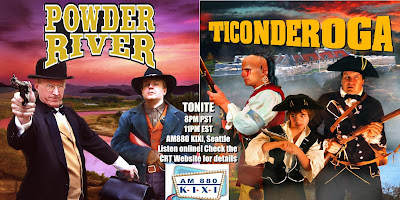