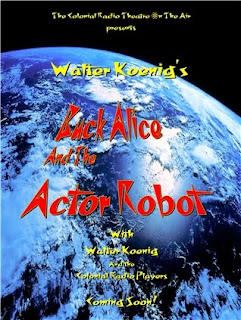 Walter Koenig's BUCK ALICE AND THE ACTOR ROBOT. Although this show has been a long time in the making, I think it will be worth waiting for. It's a fun production: theater of the absurd, black comedy, and some great writing. After a long delay we are finally on track and have two editors on the project, Seth Adam Sher and Jim Hamilton, and Walter Koenig is very much involved with the editing and pacing of the show.

This is not the typical CRT show, and already I found a "critic" who wrote about it, pretty much blasting it before hearing it - which is amazing to me. Judging it before it is even released. Then again, we have come to expect that sort of thing these days. People hear what they want to hear. I remember a review we got when we released THE ALAMO back in 1999. A critic mentioned how he "rolled his eyes when Travis drew a line in the dirt for the defenders to cross." Well, the amazing thing is, that never happens in our production! It wasn't even in the script because I knew it was legend and not fact - and yet - here was this guy accusing us of having it in our show. Incredible. You can still see the review online where it has been misleading potential listeners for 11 years.
BUCK ALICE is one-fun-show. I am loving what I am hearing so far! Walters fans will really enjoy this one.

Last week we recorded THE PRINCE AND THE PAUPER with a great script by MJ Elliott (Father Brown Mysteries, Perry Mason Radio Dramas) and a wonderful cast headed by CRT teen stars Anastas Varinos and Isaac Bean. We hope to have this one ready for a Thanksgiving Day Broadcast on Sirius/XM.

The world of contracts and negotiations have been dominating the CRT agenda for a few months and I am hoping that we are just about set and ready to make some exciting announcements. Yes, I have been talking about a new publisher since last October, and yes, it has taken this long to get biz done and ready for the dotted line. It will be well worth it though, and we are excited about it.

May will be a quiet recording month as we focus on getting BUCK ALICE ready for release. In fact, I'm not sure I will be recording at all until June. Gives me some time to catch up on my scripts which have taken a slow turn these past few weeks.

Not a week goes by that I do not get emails about Powder River Season 5. We will start recording new episodes this summer! These will be our final episodes in the series, and when completed (and assuming I get all the episodes done I want for the final season) we should have a grand total of 75 half hour episodes and 2 feature length productions. I'd love to hit 105 episodes, but someone else would have to write the 30 scripts to get there. Still, 75 is not a bad run at all. :)