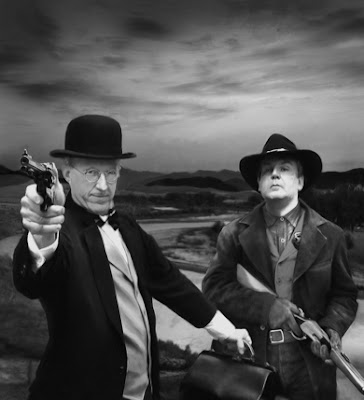 Busy busy around here. We have three new CD/downloads being released this month:

On June 9th we begin recording new episodes of our western series POWDER RIVER. 15 episodes are planned for this, our fifth season. 60 half hour episodes have already been produced in this series. Recording will continue thru August and the new episodes will begin airing in the Spring of 2012.

June 14th we will be recording JEEVES AND WOOSTER - JEEVES AND THE UNBIDDEN GUEST, from a script by MJ Elliott.

On June 25th will we record THE EMERALD CITY OF OZ - our sixth OZ story by L. Frank Baum. We haven't recorded an OZ story in 11 years, so this will be fun.

ROLLING INTO SUMMER ON SIRIUS XM 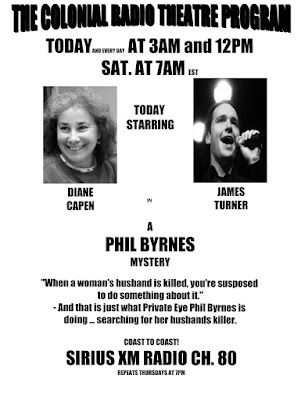 This week, Mon-Fri. on our Sirius XM Book Radio show, we will be featuring Diane Capen and James Turner in A PHIL BYRNES MYSTERY. Written by Sable Jak, this seven episode mini-series will take us into the summer season that will feature some brand new programs - including: LOGAN'S RUN - LAST DAY, THE MARTIAN CHRONICLES, TREASURE ISLAND,and GETTYSBURG. TREASURE ISLAND has been run before, however this is a brand new version that will be released on CD in July, and GETTYSBURG has only been aired twice since we have been on the air (Both times as a three hour special). This time, it will run in half hour episodes.

We will also be recording some new episodes of out podcast show, COLONIAL RADIO TALK. Upcoming CRT Players who will be guests on the program include Tom Berry, Joe Caliendo Jr, Judson Pierce, Leigh Berry, Shana Dirik, and CRT Music Director Jeffrey Gage. New episodes will start appearing in June, and can be downloaded via our website and i-Tunes.
Posted by JR at 3:58 PM No comments: