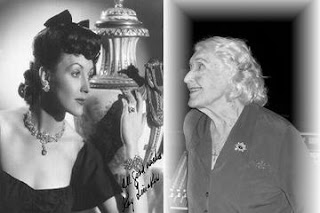 Our friend Kate Phillips turned 94 on July 19th! Kate was known in her
Hollywood years as Kay Linaker, and appeared in featured roles in such
pictures as DRUMS ALONG THE MOHAWK with Henry Fonda, BLOOD AND SAND
with Tyrone Power, KITTY FOYLE with Ginger Rogers, THE INVISIBLE MAN
with John Barrymore and many more, including a few CHARLIE CHAN
pictures! I met Kate in 2003 when she saw our BIG CHRISTMAS RADIO BROADCAST OF 1946 at the Claremont Opera House in NH. She's quite a lady, and has
known everyone from Bing Crosby (she used to babysit his kids, and
said the claims of abuse is "bull"). Glenn Miller, Errol Flynn, and on
and on. Kate also wrote the screenplay for the motion picture THE BLOB, as well as a ton of radio shows and TV shows, including BONANZA and LASSIE. She gave me some great pointers on script writing! Kate still teaches film at Keene State College! She doesnt have
a computer, so she won't see this posting, but HAPPY BIRTHDAY anyway,
Kate! She's one amazing lady. ~JR
Posted by JR at 1:43 AM No comments:

I'm in Cohasset MA tonight with Liza Minnelli! (She has GOT to guest star on THE DIBBLE SHOW- how cool would THAT be?).
Posted by JR at 2:50 PM No comments:

This week I'll see the first storyboards for THE DIBBLE SHOW from our friends up in Toronto at HoC! I can't wait to see how it's developing. Also, we are now in talks with a rather successful motion picture producer in CA about bringing an iconic character to life in a radio series! This is VERY exciting stuff, and I hope I can tell you all about it soon.
Also, in another couple of days I will be able to announce our third collaboration with Ray Bradbury, but we have to wait until the agents do their thing.
Posted by JR at 10:10 PM No comments:

After a comfortable two years in a nice time slot on XM Radio, Colonial is being moved to a NEW spot on Sonic Theatre! CRT will now be heard at 4am, 12pm, 6pm EST, and THE DIBBLE SHOW will air on Thursdays at 3:30pm! All this starts August 6th. All in all, not bad.
Posted by JR at 2:48 PM No comments: