Busy day, but wanted to do a quick update. We're getting BUCK ALICE AND THE ACTOR-ROBOT ready for broadcast (starting Nov. 15th for 7 nights), and MJ is editing the final three JARREM LEE episodes.

This week we record the final 4 episodes of PROJECT-X, which we will announce soon. This will go on the air in January, on weekends. We did 36 episodes in just a little over three months, so I think we'll have a wrap party to send this one on its merry way to editing land. Congrats to Deniz Cordell for cranking out 36 scripts (well over 1,200 pages) since early July. Quite amazing.

A CHRISTMAS CAROL is now in release! Our first release with Brilliance Audio. This is the first time it has been available on CD (except for a box set with three other Dickens titles) and we're hoping it does well in retail.

Check out the incredible new cover art illustrations from Jeff Hayes (Guns of Powder River, Father Brown, Prince and the Pauper, Treasure Island) Jeff, along with Ron Boyd (Buck Alice), are creating some great covers for our upcoming releases!

Got some really great emails from folks who said they enjoyed the VINCENT PRICE PRESENTS episodes we ran over Halloween weekend! We'll be recording a few more this month, and we'll most likely run them on our Sirius XM show late winter or so. We are hoping to have a set out on CD in early Spring.

Our new production of Mark Twain's THE PRINCE AND THE PAUPER is scheduled to be broadcast on Thanksgiving Day. We're very excited about this production, and the music is outstanding. Headlining the cast are Anastas Varinos, Isaac Bean, JT Turner, Joseph Zamparelli Jeremy Benson and Shana Dirik.

We recorded our annual Christmas Special for our show on Sirius XM back in September, and we're getting it ready for broadcast. Music legend Neil Sedaka granted us permission to perform some of his new Christmas songs, and they are fantastic. Can't wait till you hear them (they are also on his Christmas CD - check it out!) My guests on the show this year are Shonna McEachern (one of the best voices in Boston), Anastas Varinos (not only can he act, he's a great singer too!) and Dibble (we needed a third guest and he was all we could get).

NOVEMBER AND A CHRISTMAS CAROL 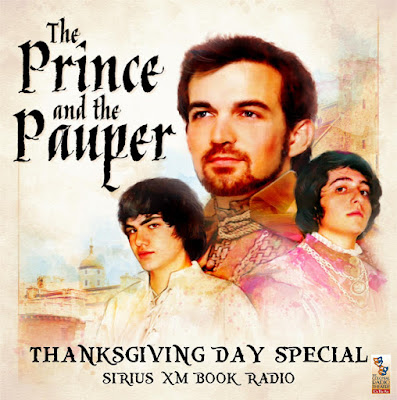 Well, as Marjorie Main said, "Another Halloween and we're all a year older!" Thanks to everyone who emailed me, or wrote on my facebook page about the VINCENT PRICE PRESENTS broadcast this weekend. Lots of great comments and it seems folks enjoyed it! We will re-run them late winter on our Sirius XM show along with two new episodes in the series. The series is literally just getting under way, so it will take some time to ramp up with episodes - but we're working on it!

TODAY is an exciting day - our CD of A CHRISTMAS CAROL is released! Our first release by Brilliance Audio. It's in stores, and online everywhere.

Our new production of THE PRICE AND THE PAUPER will air on Sirius 117, and XM 163 on Thanksgiving Day! Hope you tune in! It has a March release on CD. Great poster by Jeff Hayes. The show stars Anastas Varinos and Isaac Bean as the Prince, and the Pauper.
Posted by JR at 12:41 AM No comments: