A Picture Says a Thousand Words 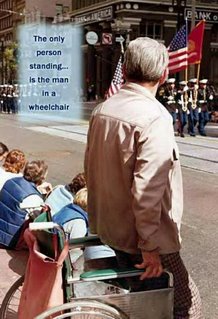 Veterans Day. Never Forget.
Posted by JR at 10:34 AM No comments: 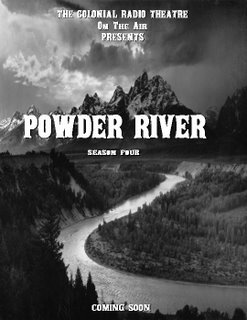 You know, it's very odd. I actually hate writing. I only do it because I need the scripts and I love radio theatre. POWDER RIVER is a good show, and I know people like it - but MAN is it tough to come up with so many western stories! Right now I'm working on my ... ummm .... hold on a sec, I need to count them .... 55th POWDER RIVER episode! This season isn't writing as easy as season 3 did. I think it's because of all the personal stuff going on right now and also so many projects that we are involved with. BUT - I thought you PR fans would like a sneak peek at some up-coming episodes! Here are the first five titles for Season 4!T

IN CHICAGO
The action moves from Wyoming to Chicago in this episode, that picks up where season 3 left off.

REVELATIONS
Still in Chicago, and we meet a character who appeared in several episodes in season two!

AMBUSH AT POWDER RIVER
Back in Clearmont again, and the action heats up with an unfolding mystery.

THE SHOOTIN' ARM
The territory is accusing the peaceful Shoshone tribe of the ambush that left several settlers dead.

THE TOMAHAWK TRAIL
Britt takes a small posse up the forbidden Tomahawk Trail in search of the killers - risking all out war with the Shoshone.

~ And that's what I have so far! 15 episodes to go. Keep an eye out on our website, because we will be posting a trailer for season 4 very soon. I think these episodes will air on XM Radio in February, but I will begin posting 1 episode per week on Spoken Network starting in December!

I really love this series. I just wish all the scripts were done!
Posted by JR at 10:07 AM No comments:

Well, spent most of the day re-editing two of our OZ programs for air, and now I'm going to recut our new production of TREASURE ISLAND for air. These will all run in December and January. OH - I'm going to be in NYC for the Dec.13th opening of DIBBLE LIVE ON STAGE , so I'm excited about that - Its odd thinking a script I wrote is being produced Off-Broadway right next door to the Phantom of the Opera(did I mention that before?). Too bad I never did a Dibble version of Phantom. Hmmm .... there's still time!
Posted by JR at 12:33 AM No comments: 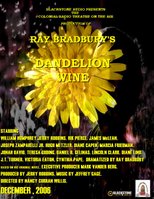 We got our first official reciew for our upcoming release of Ray Bradbury's DANDELION WINE. The CD isn't out until January 1st, but Bradbury Media in the UK got an advance copy. I don't agree with some of the comments :) but for the most part its an awesome review and we're VERY happy with it! Of course, the BEST review we got was from Ray himself, who said it was beautiful, and it made him cry. Can't beat that in my book. Check out the review HERE
Posted by JR at 12:34 AM No comments:

The session was OK last night;another 2 PHIL BYRNES mysteries in the can. Everything is on schedule with this one and should have no trouble airing in January. It's a fun cast and some cool stories. I think lovers of film noir will enjoy this series.

Tonight I'm writing for POWDER RIVER and trying to get myself out of another complex storyline I've gotten myself into. Why do I do this to myself!!??

Did a little yard work this afternoon (hoping to get the brain cells going again), and that was all well and good. I'm not really cut out for yard work though. I should do a dibble show about it. Oh wait ... I already did

OH - and the most important thing I did today - I VOTED! Now, I am not going to get political here on my CRT blog, however one of the local TV stations has just projected Dem.Liberal Duval "together we can" patrick as the winner in the Governors Race. So, now we have a dem. house and a dem. governor here in good ol MA - We'll finally find out what "together we can" - really means; i.e; GET READY TO BE TAXED BACK INTO THE STONE AGE! And dare I leave out fearless leaders like Ted Kennedy and that stand up comedian with the bad timing John Kerry representing us in DC. Pass the scotch. That's it - I'll shut up now. Don't debate me - I won't respond :) I'll bet a couple of former CRT players who had issues with my political leanings are dancing a jig tonight :) I doubt they'll be dancing in four years though - their wallets can't afford the music (yeah, I'm bitter, but these Bozo's were rather rude to me in the first place)

OK - Out of the political arena of BS; I am working hard to finish a script for Mr. B that we are going to be recording in December (if he approves it!). I'm looking forward to this one very much!

I kinda miss doing our Colonial Radio Christmas Show. We did it live on stage, playing some really nice Opera Houses in New Hampshire and Maine. I want to take that out again sometime. Maybe for a months run in the same location. Maybe next year.

Recording continues tonight with A PHIL BYRNES MYSTERY, and would you believe I am having trouble casting a major role? So, we'll see what happens. I have a ton of very willing and excited child actors on our CRT players list, and I wish I had more for them to do! I am thinking about writing a series where I can use them more.

I managed to send XM Radio enough DIBBLE episodes to carry them into late April, so that's all set for a few months! This week I need to get them new episodes for December (for our Mon-Fri show), and also I am writing more POWDER RIVERS for next Mondays recording session.

DIBBLE in NYC has been cast! I am planning on going Opening night, and this is going to be something to see! How weird will it be seeing a totally different cast do the roles we have been playing on radio for years and years? I'm looking forward to it, and I LOVE Christmastime in NYC anyway, and I hear there's an awesome party afterwards. :)
Posted by JR at 8:49 AM 3 comments: