Why not!?
Come join the group! Lots of updates and interaction.
THE COLONIAL RADIO THEATRE ON FACEBOOK
Posted by JR at 3:23 AM No comments: 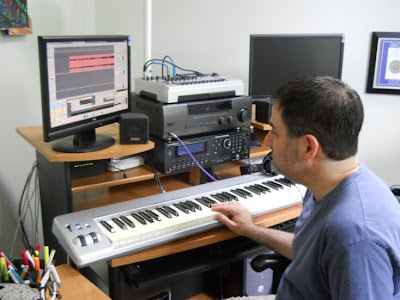 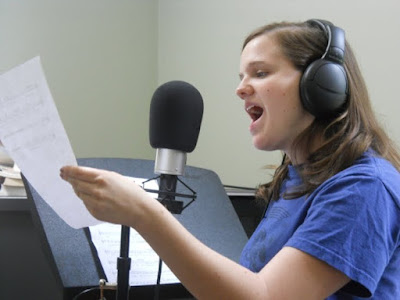 Yesterday we started recording the musical numbers for our upcoming production of
THE STAR ANGEL, which is scheduled for a Nov. 2012 release. Kerry Donovan plays the role of "Samantha" and you can see her here recording THE SAME OLD SNOWMAN - which is the opening number in the show. Also, here is a shot of our music master and genius in residence, Jeff Gage, in the music studio. Jeff has scored 99% of the productions we have released over the past 16 years. THE STAR ANGEL is a full length musical, but it is not the first musical we have made. In 2004 we tested the waters with JACK AND THE BEANSTALK. Music recording for THE STAR ANGEL will continue over the summer.
Posted by JR at 1:00 PM No comments:

THIS WEEK AND NEXT

We have just recorded THE EMERALD CITY OF OZ, the 6th story in the classic Baum series, and our first OZ production in 11 years. I was very happy with the recording session, and this one will be a lot of fun when it is released in 2012.

On Wednesday morning we start recording music for our production of THE STAR ANGEL, which will be released in Nov. 2012. This is a full length musical, and Jeff has written some incredible songs.

Wed. evening we start on TOM CORBETT - SPACE CADET! This is a feature length stand alone we are making based on the comic series by Bluewater Productions.

Joseph Zamparelli and Anastas Varinos return as Long John Silver and Jim Hawkins in RETURN TO TREASURE ISLAND. Production begins July 6th with a script by Gareth Tilley, and the release date set for June 12, 2012. The program will also be broadcast as a special on our Sirius XM Show this Thanksgiving. In the meantime, catch them in the original TREASURE ISLAND, being released July 5th, 2011!