GET READY TO RUN 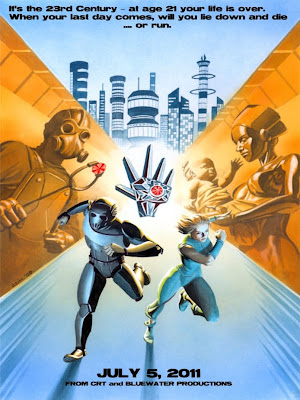 I just heard our completed production of WILLIAM F. NOLAN'S LOGAN RUN - LAST DAY this afternoon. This is one exciting show! The script by Paul J. Salamoff is fantastic and without question this is one of our fastest moving productions, with the average scene lasting about 3 minutes. It's a roller coaster ride. For those who are not familiar with the story,

Logan-6 has been trained to kill. Born and bred from conception to be the best of the best. His time is short, but before his life ends he’s got one final mission — find and destroy Sanctuary, a fabled haven for those who chose to defy the system.

When Logan meets and falls in love with Jessica, he begins to question the very system he has sworn to protect. Soon they are both running for their lives.

It's a great book by William F. Nolan and George Clayton Johnson CHECK IT OUT ON WIKIPEDIA.

Paul Salamoff wrote the script that we used, which is also the script used to create the comic book released by Bluewater Productions. Bluewater and CRT partnered on this audio presentation.

Jeffrey Gage composed the score, and the production was masterfully produced by Seth Adam Sher (Zorro and the Pirate Raiders, Zorro Rides Again, The Martian Chronicles).

Everyone at CRT is very excited about this production! It will be released on CD and Audio Download by Brilliance Audio on Tue. July 5th. You can pre-order it HERE
Posted by JR at 1:09 AM No comments: