CRT IS STILL BLASTING OFF TO MARS 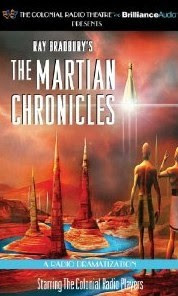 Our production of RAY BRADBURY'S THE MARTIAN CHRONICLES remains the best selling version of this title on Audible.com - and has been for a while (and there are a total of 5 recordings for this title). Ray told us his favorite story in our production is USHER-II. Released in June of 2011, it is the first time the book has been fully dramatized, cover to cover, and clocking in at 5.5 hours, its one of our proudest achievements. It has also remained as one of our top 10 best selling CD's since its release - on Amazon.
READ THE REVIEW ON BRADBURYMEDIA.COM
Posted by JR at 12:33 PM 1 comment: