DICKENS ALL THE WAY 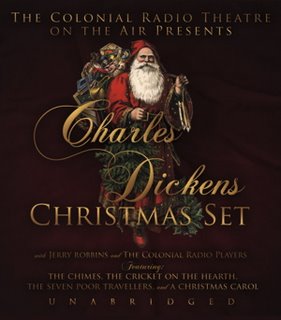 How cool is that artwork!? I'm really glad that our four Dickens holiday shows are FINALLY out on CD! THE CRICKET ON THE HEARTH, THE CHIMES, THE SEVEN POOR TRAVELLERS and A CHRISTMAS CAROL are available in the 4-CD set! Out of the four, only SEVEN POOR TRAVELLERS, is the original version! TRAVELLERS was actually the last story to be recorded, but the very first CRT show to be digitally recorded! The others had already been done, and edited. So, we release them on cassette tape, but that happens three years later. In the meantime, once I heard we were going to be released as a boxed set by our then publisher, I decided to do the other three shows over all over again, in digital stereo. So, in the Grand Thalburg style, CRICKET, CHIMES and CAROL were ditched, totally re-recorded (only a couple of the original actors remaining) and released. Those are the versions you hear in this set. Turn the lights down low, with a Christmas Tree in the room, and listen to our CHRISTMAS CAROL. It's magic :)
Posted by JR at 6:40 PM No comments:

CRT does AESOP / and I HATE computers 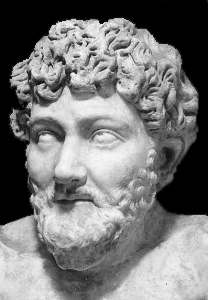 So there I am on Saturday after clocking in a 17 hour writing spree (for a script I needed to finish on Sunday - the new Ray Bradbury project), SAVING after every page .... then I shut down the document to work on the New York Dibble show, and la la la, go about my merry way. IMAGINE MY SURPRISE when, the following morning I open the Bradbury script, to discover that NONE OF THE SAVES WORKED! That's right. Everything I did on Saturday was g-g-g-GONE! GONE WITH THE WIND! After I had a melt down with some 25 year scotch, I then had a nervous breakdown. Mainly because the dramatization was not easy, and this was the toughest part of the book.

SUNDAY was a waste. I tried to recall the lost document - didn't work.

MONDAY I had recording sessions from the afternoon on, for the POWDER RIVER session the previous Monday. SO - at 8pm Monday night I sat down and started on the script, re-writing what I did on Saturday. It's never as good the second time around. Determined to finish the script - I sat here at the writing desk through the night, morning, early afternoon (pots and pots of coffee), finishing at 2:30pm. Emailed the script off to Mr. Bradbury, and hopefully he will approve of it.

That night, the cyber head ache kicked in. Always happens after 20 or more hours at the computer.

BUT - the script is done, and with luck the show will be in stores in 2007. Well, we have to record it first, but you get the general idea.

We finished a new show this week ... A VISIT WITH AESOP. Now, this is really cool. I know parents are going to say "Aesops Fables? Well, maybe for the kids ... but not me." I'm telling ya, this is one fantastic show! J.T. Turner adapted it, and performed it; and it's so FUNNY! It's also unlike anything CRT has produced before. Basically a one man show, J.T. has a staggering array of voices, and add another classic Jeffrey Gage score with the incredible post production wok of Chris Snyder - and you got a real gem. Kids are going to love it, and any parent within earshot is going to have some great laughs and smiles. Not sure when Blackstone will release this one - probably in the spring - but I really have no idea.
Posted by JR at 10:31 PM No comments: