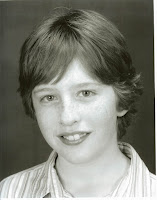 I am pleased to announce that we have cast Matthew Scott Robertson in the role of TOM SWIFT, and Hugh Metzler as his inventor-father, BARTON SWIFT. Matthew co-starred in our production of Ray Bradbury's SOMETHING WICKED THIS WAY COMES, and has an extensive list of theatre credits.
Hugh Metzler first appeared with us in POWDER RIVER where he played Judge Parker. He has also been heard in CAPTAIN BLOOD, DANDELION WINE, and our new series, THE FATHER BROWN MYSTERIES. Hugh has a vast history on the stage, and we know he's going to be great in this fun role.

This March, The Colonial Radio Theatre on the Air will start recording Victor Appleton's TOM SWIFT and his MOTOR CYCLE. Originally published in 1910 (when motor cycles were a new invention and a big deal), this drama had boys across the country on the edge of their seats, turning the pages to find out what happens next! It's an adventure story full of secret plans, spies, and daring escapes - all centered around a youngster "mechanical genius" named Tom Swift.
My Dad (now 87) was a fan of these books, and even has a first edition. I read the first in the series (there are 25 by the original author), and immediately saw great potential for a radio play. I talked with Chris Snyder to see how difficult it would be to create 1910 in sound, and after taking inventory, it appears we have everything we need.
It seems the books were written by many ghost writers, in fact, I think Victor Appleton never actually existed - it was just a name invented to keep the books as a common thread by a single author. I may be wrong on this, but I am pretty sure that's what I read.
It doesn't matter though, because all I am interested in is bringing these wonderful stories alive in sound - and that's just what we're going to do. Are they dated? Yes - but they are still exciting. Adventure never dates itself.
TOM SWIFT and his MOTOR CYCLE IS the first in what we hope will be a long running series. It will be release it as a multi-CD set under it's original title, and it will also be edited for our radio series under the title THE ADVENTURES OF TOM SWIFT, and will debut this summer.
Posted by JR at 10:37 AM No comments:

Had our final recording session last night (for a couple of months anyway) for the FATHER BROWN series. M J Elliott has written some wonderful scripts, and this is a fun series. So these first 8 episodes will make up "Volume 1!" Exciting! Matt McLaren sent over the final edit for episode 3, and he's doing a great job.

On the western front, Chris Snyder has turned in the final episode for POWDER RIVER season 4! They will start running on our XM show in five weeks. We now have a total of 60 episodes! After a break, I am sure I'll write a few more. Hope so, anyway. The trailer should be out early next week.

Later this week, I'll announce a brand new series that we start work on in March (hopefully for a summer or fall release). I'm very excited about this one! Hint - it is set in the year 1910 (and that's not a very good hint I'm sorry to say)

DANDELION WINE is still on Blackstones Bestseller List on their home page! It's in 5th place (was in third yesterday), and it has been on this list since the first week in January - and it's the only title still on the list from their January releases. Pretty exciting!

Work continues on Ray''s SOMETHING WICKED THIS WAY COMES, and we should have a "teaser" out in a couple of weeks.