Just a quick production update. We are currently recording the 5th volume of THE FATHER BROWN MYSTERIES, with four new adventures on the way: The Mirror and the Magistrate, The Curse of the Golden Cross, The Hammer of God, and The Wrong Shape. We are recording in July and August, and they will be released early in 2013. The show will also have a new music score!

JEEVES AND WOOSTER by P G Wodehouse. We have recorded six episodes that will be released in three volumes, starting in early 2013


POWDER RIVER SEASON 7 is already in production, and will premiere in April, 2013.


THE CANTERVILLE GHOST will begin production in July. This is a feature length production with a fun script by Gareth Tilley.


That's just a sample :)  There are several more productions starting in August - all will be released in 2013. More info on those later.
Posted by JR at 10:52 AM No comments:

A SNOWMAN SPECTACULAR IS COMING YOUR WAY! 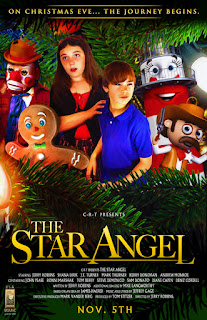 THE STAR ANGEL is our new feature length holiday musical, being released this fall. Jeff Gage has written 15 songs that range from the beautiful Christmas ballad  "Safe In Your Mem'ry," to the rousing, Broadway-Style show-stopper "Snowman Spectacular!"

In THE STAR ANGEL, Samantha and Sean are a sister and brother celebrating their first Christmas since the death of their father. While Samantha embraces the holiday spirit, Sean is filled with apathy and indifference over the season. On Christmas Eve, after Sean breaks one of his father’s ornaments on purpose, a strange force shrinks both of them down to ornament size. They meet an Old St. Nicholas ornament who tells them that the only one who can return to normal size is the magical Star Angel, who resides at the very top of the Christmas Tree – and they must reach the top before sunrise, when the magic that brings the ornaments to life fades away, and turns Sean and Samantha into ornaments as well. With the aid of the Cookie Dough Man ’66, Lighthouse, Sheriff and Pockets the tramp clown, they embark on a journey to the top of the tree. Blocking their way, is the sinister Scrimshaw, a damaged ornament who lives on the “Empty Side” of the tree, and who, with his army of Snowmen, has vowed revenge against Sean for dropping him on the floor, causing him to be glued together again - and disfigured. It's a race again time in this magical, musical adventure for the whole family.

THE STAR ANGEL Amazon Pre-Order
Posted by JR at 11:43 PM No comments: 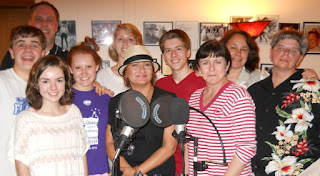 We started recording BEACON HILL on May 23rd and had a great session. We now have two episodes taped, and one edited with the second underway. The show sounds great, and everyone is developing their characters which is always exciting to hear. I have never done an hour long series before, so I've been learning as well . I find it easier than the half hour scripts!  In a POWDER RIVER show, for example, I need to wrap it all up in 36 pages, and here I get 64 pages - and with several stories playing out in the series at once, when I get bored with one, I just cut to another aspect of the plot after a dramatic line :)

Right now, my writing schedule is very heavy, which is why my posts are few and far between; I am currently working on finishing off BEACON HILL, with 2 scripts remaining, and at the same time I am writing fifteen new episodes for POWDER RIVER SEASON 7; and we have a few shows in post production that I'm overseeing as well - so very busy days here, as usual ... but that's a good thing, right?

Our productions of THE MARTIAN CHRONICLES and LOGAN'S RUN have won Mark Time Awards for Excellence in Adaptation. We've won 6 since 2005. Congrats to everyone involved in those projects.