FINAL SHOW OF THE SEASON 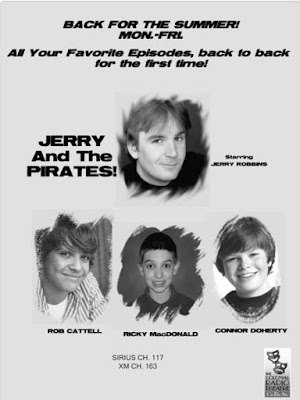 All you Sirius/XM Subscribers - DON'T MISS THE FINAL "FIRST RUN FRIDAY" episode of the season on our Sirius/XM show today at 12pm (Eastern). Our 5th season finishes off with JARREM LEE - GHOST HUNTER - The Last Stand! This year we brought 47 new half hour programs to the air! JERRY AND THE PIRATES begins a summer run Mon-Fri. starting July 5th, and ...we'll be back with new shows with our 6th Season premier on SEPT. 23!
Posted by JR at 11:20 AM 2 comments: 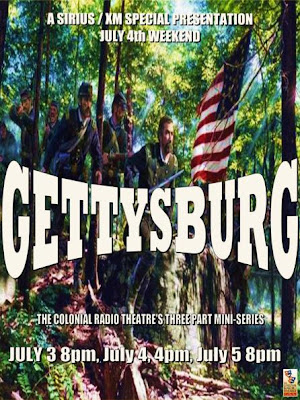 To commemorate the 147th anniversary of the battle of Gettysburg, SIRIUS/XM Book Radio will present CRT's 1999 mini-series, GETTYSBURG.
"This is a high quality, digitally recorded production features top-notch actors and music... a great selection for Civil War buffs... and students." - Elaine Hanson - BOOKLIST.

" The sound effects are good, the narration clear and crisp, the various voices even better ...an endless spectacle of blood and dust and insects and carnage. That's what the war itself was like, of course. Here are the fatigue, the despair, the pain, the screams, the deafening cannon plowing through human ranks, death, and dismemberment. Sometimes the politicians are heard. More often the generals and officers and foot soldiers. One would swear that a newspaper reporter with cassette recorder in hand was dashing around the battlefield in the thick of it" - AudioFile

In the tradition of classic radio plays, with a full cast, music and sound effects. The Colonial Radio Theatre On The Air is proud to present this spectacular three part production - "Gettysburg." Highly detailed and accurate, you will find yourself in the middle of General Buford's skirmish line, Little Round Top.The Wheatfield, Pickett's Charge, and listen while President Lincoln delivers his address some four months later. No matter which side you are loyal to... "Gettysburg" will have your heart pounding with its action, adventure and suspense. 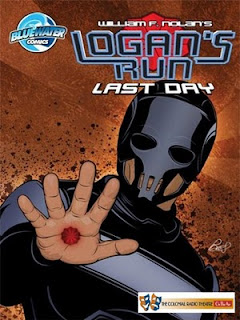 COOL NEWS! CRT will have the honor of bringing William F. Nolan's LOGAN'S RUN - LAST DAY - to audio! Based on the classic book by Mr. Nolan and George Clayton Johnson, we are very excited to get the chance to bring this incredible story to life with a full cast, full music score, and a couple of hundred thousand sound effects!

LOGAN'S RUN - FINAL DAY depicts a dystopic ageist future society in which both population and the consumption of resources are maintained in equilibrium by requiring the death of everyone reaching a particular age. The story follows the actions of Logan, a Sandman charged with enforcing the rule, as he tracks down and kills citizens who "run" from society's lethal demand — only to end up "running" himself.

CRT will produce the show in association with Bluewater Productions.
Posted by JR at 2:26 AM No comments: