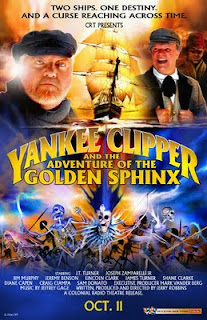 On Oct 11th we'll be releasing our production of YANKEE CLIPPER AND THE ADVENTURE OF THE GOLDEN SPHINX. Recorded in the spring of 2004, it was our second serial, in 15 chapters, produced immediately after POWDER RIVER (which was only supposed to be 15 episodes total). Although it is now seven years old, it has only been available as a download on three sites, as well as several airings over the past six years on our Sirius XM Radio broadcast.
JT Turner and Joseph Zamparelli Jr. head the cast which includes Jim Murphy, Sam Donato, Jeremy Benson, James Turner, Diane Capen, Lincoln Clarke, and Shane Clarke.
Posted by JR at 9:41 PM No comments: