Amazon has released our October releases early - so if you ordered YANKEE CLIPPER, VINCENT PRICE 2, and THE LEGEND OF SLEEPY HOLLOW from Amazon, you should have them by now! Other retail stores will most likely hold to the Oct. 11th release date, but ya never know!

BOOKS A MILLION - the southern book store chain, will be carrying SLEEPY HOLLOW this October - so you can pick up a copy there if there is a store in your area. Okay, enough plugging. Tonight we record the season 5 finale of POWDER RIVER, and there you have it - Season 5 is complete! We start running the show again on Sirius XM starting Nov.28th, which will lead up to the premiere of Season 5 on March 16th. I am sure the usual complainers who hate the show will be very vocal in various forums, but thankfully, fans of the show outgun the haters.

Recording is completed on WRATH OF THE TITANS and the editing is coming along! Bryan is doing a fantastic job in post, and I am looking forward to the final result. As he did with PRINCE AND THE PAUPER, Deniz Cordell is writing the score to this production, and Jeff Gage will be orchestrating it. Like LOGAN'S RUN, the music in this show will have a new "sound" to it - or should I say style.

Coming up we have another FATHER BROWN recording this month, as well as another VINCENT PRICE PRESENTS episode, entitled PAWNS.

THE LEGEND OF SLEEPY HOLLOW - we recorded the main vocals for this on Feb.15, 2005, however it would be 8 sessions as I recall before the show wrapped (three sessions were required for the song FIRE AND THUNDER alone - one for me, one for Joe Z, and one for the chorus). There was a separate session for the prologue voices, a session for the character Derek Aalerud played, a session for the narration, and a re-take session for Joe Z as Brom Bones. In the end, I think we stayed as close to the book as is possible, and Jeff created one of his most beautiful scores. It was the showcase program at our CRT 10th Anniversary Party, and was originally released by Blackstone (they have since recorded another version, bless them) and it is now out for good and always from Brilliance Audio. It was first broadcast on our Sirius XM Show (it was just XM in those days) on Halloween day, 2005, and has run as a special every year since.

We do get the occasional complaints and emails from people saying it isn't violent or scary enough - "he didn't cut off one single head in the whole show" said one kid from New York. That's what happens when folks see the dreadful Tim Burton picture and never actually picked up the original book.

More than a ghost story, or Halloween story, THE LEGEND OF SLEEPY HOLLOW captures the mood, the sights and the aura of autumn in New England. If you live in the desert and have never experienced what it is like to be in new England when the leaves are turning and falling, and the wind gets a bite, and pumpkins spring up - well, this story captures that all on its pages. The undercurrent is, of course, superstition and the paranoia of the leading character, Ichabod Crane, and this compliments the season and the story becomes a ghost story at the harvest dance when the stories are told of the local legends. Washington Irving was an amazing writer. I only hope we did him justice in this radio drama. It was, without question, the hardest script I ever adapted, but the production remains one of my favorites - and Lincoln Clark was born to play Ichabod.
Posted by JR at 5:43 PM No comments: 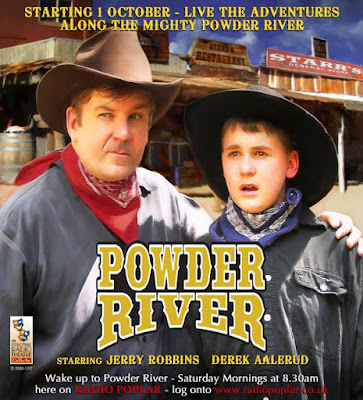 Hi all - we had a GREAT recording session this week and we have wrapped the studio work for WRATH OF THE TITANS. What a fun cast and script! I think you're all going to like this one (unless you don't, in which case - hey, what can I do?)! Some very cool performances!
Next up this week, we record the season 5 finale of POWDER RIVER. Yep, the fall recording schedule is up and running as we record weekly for the next few months.

I have received a few emails from folks wondering why we are about to record season 6 (starting Oct. 17th), and Season 5 has not been on the air or released yet. Each season of POWDER RIVER has 15 episodes; once recorded, each episode takes anywhere from a week to two weeks to edit together. By the time our producer is finished editing the season of episodes, we will already have recorded all of Season 6; this way, when season 5 finishes its premiere run on Sirius XM, it will only be a few months to wait (over the summer) till Season 6 goes on the air. That's better than before - when the show first started, it was year between seasons. We're getting them completed as soon as we can, and I can't wait to see what everyone thinks about them!

AND TO OUR FRIENDS IN THE UK - POWDER RIVER begins SAT. OCT. 1 on POPLAR RADIO
Posted by JR at 8:38 PM No comments:

THE CASE OF THE HOWLING DOG
Posted by JR at 11:09 AM No comments:

What's going on around here?

Look for CRT's THE LEGEND OF SLEEPY HOLLOW this October on the shelves of the BOOKS A MILLION stores!
Posted by JR at 12:10 PM No comments: