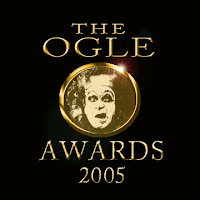 Last July CRT won the Gold Ogle Award for the Best Fantasty Production of 2005 with our THE LEGEND OF SLEEPY HOLLOW. It was SO COOL winning, especially since it was such a difficult program to make.
The award is named after Charles Ogle (pictured left, as the Monster) who played the very first Frankensteins Monster in the 1910 Edison production.
This year we have entered our production of DANDELION WINE, which was scripted by Ray Bradbury, for the Fantasy catagory. We were never able to enter the Ogle's before, because we had never produced any sci-fi or fantasy until SLEEPY HOLLOW; so it's fun to be able to enter a show!
Heard some of POWDER RIVER tonight on XM. I don't get a chance to listen too much these days. It was an episode called THE WAGON BOY, which is one of my personal favorites, mainly due to the performance by James McLean. He's only 11, but MAN, can he pull off the dramatic stuff! After hearing him in this, it was a no-brainer that we needed to add him to the cast of regulars. Anyway, it was nice hearing a little of it tonight.

CRT has made an agreement with JIM FRENCH PRODUCTIONS in Seattle, to broadcast POWDER RIVER as part of their IMAGINATION THEATRE program! We will be on the first weekend of each month on their affiliate stations! There's a hundred or so stations, so it will be fun bringing the series to a whole new audience!

We will be filling a one hour slot, so the episodes are being re-edited. Each hour will contain two episodes, re-cut to make a single, continuous program. They are also being re-mastered for a richer and fuller sound.
Jim French has been producing radio plays since 1965, and he has amassed over 600 programs. His company is best known for their detective series HARRY NILE, and they do a magnificent job with the ADVENTURES OF SHERLOCK HOLMES, which is one of my favorites on XM. Here are just some of the stations we will be heard on-

- and many more. I am very happy that Imagination Theatre is giving POWDER RIVER this opportunity, and I hope the show does good numbers for them (so TUNE IN!!!). I'll publish a more precise schedule of stations when it is available. So remember - once a month - starting the first weekend in April!

The trailer for POWDER RIVER - SEASON 4 is now live on Spoken Network! Check it out - you can download it free of charge. Episodes will be ready for download starting the week of March 19th, when the series plays its first run on XM, Ch. 163.

My 9 year old next door neighbor wrote his first book! It's a three page (maybe two and half) story that isn't that bad! He was hoping to get it put onto a CD, so I think we'll record it for him. I've been letting him and some of his friends snowboard in my back yard (It has a good hill for snowboarding) - so they've been out there for an hour or so each day having a ball.

Yesterday I wrote a 17 page "sample script" for a story we might do. We'll submit it to the 'powers that be' and see if it goes anywhere.

We have a television show in development, and it's now "pitch time" to the studios (and nail biting time for me). We are working with a top-notch animation studio who has worked very hard in developing this project, and everyone seems to think we have a good shot at it. Wish us luck!

I will have some cool POWDER RIVER news to announce soon - perhaps this week.

TOM SWIFT is the script I am working on today. It's just about finished. Can't wait to start this one.
Posted by JR at 10:14 AM No comments: