Oh, Lord it's 3:30 in the morning, and I'm actually starting to get tired. Normally, this is "early evening" for me, but tonight I actually think I'll be turning in before the birds start chirping (early for ME anyway).
Tonight we had a good recording session for JARREM LEE, recording three episodes - and now only three remain in the series, and we'll be taping those on October 5th.

I just posted a press release from the folks at Bluewater about two new shows we are signed to do! We're headed back into darkest Africa with QUATERMAIN - a nice follow-up to our 2008 production KING SOLOMON'S MINES. Another story, WAR OF THE ELEMENTALS is sure to be a fun one as well!

Our VINCENT PRICE PRESENTS series is coming along - Bryan Rothrock is just about finished editing THE TINGLERS, and WOW is it cool! He has really captured the sound and feel of a 1950's horror movie and he has done an incredible job on this. We have taped two other episodes and will do a few more in October. I am thinking about going to St.Louis for the 100th Anniversary of Vincent Prices' birthday. Any CRT fans in St. Louis!??

Another big recording session lined up on Saturday - three shows actually - two "Project X's, and then we record our annual Christmas Special for Sirius/XM, which, this year will air on Dec.24&25.

LAST MOVIE I SAW: Last night, watched "Requiem for a Heavyweight" - Anthony Quinn, Jackie Gleason, Mickey Rooney, Julie Harris. Have you seen this picture!?? Amazing. Loved it. Don't know how I missed this one for so many years.
Posted by JR at 3:26 AM 1 comment: 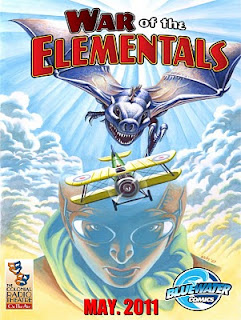 Months ago Bluewater announced that both Logan's Run and Vincent Price Presents are becoming radio shows! Colonial Radio Theater on the Air announced today that they have entered into an agreement with the comic book publishers Bluewater Productions to also produce "War of the Elementals" & “Quatermain”.

Explained producer Jerry Robbins: ""I am very excited to get the chance to record this amazing graphic novel as a radio drama. We had a hit with our production of the original KING SOLOMON'S MINES in 2008, and this story is every bit as exciting and adventurous. I can't wait to get it into production!"

As for WAR OF THE ELEMENTALS Robbins continued, "The cover art alone on this story grabbed me! How great a concept is this!? The Royal Flying Corps' 5th Squadron is fighting in WWI when they are suddenly transported to a world dominated by giant flying bat-creatures! This is the stuff that makes for fantastic radio theater! We get letters and emails from kids who are just discovering our shows and they rave about how much fun they are, and how much they enjoy them. Radio drama has been around for many, many years - and it is great when kids are discovering it for the first time. They are forced to use their imagination. No movie can ever capture the world that you create in the theater of your own mind - we supply the sound to your minds picture, and the combination is unbeatable. I think WAR OF THE ELEMENTALS is one of those stories that is going to be incredible as a radio adventure! "

Both are based off the comic book series from Bluewater Productions. War of the Elementals was written by Scott Davis and Quatermain the graphic novel is out in the Fall and written by Clay and Susan Griffith. To pre-order it go to Amazon: http://amzn.to/cREdOu

Celebrating it's 15th year, the award winning Colonial Radio Theatre on the Air's goal is to resurrect an old medium - making it modern and relevant - in a new and unique way for people to enjoy. With people's busy schedules keeping them on the road and limiting their time to read, "This is the future," said Vander Berg, "audio drama is the next wave."

More information can be obtained by visiting http://www.colonialradio.com/

High-resolution images and interview opportunities are available upon request.

Bluewater aims to unite cutting-edge art and engaging stories produced by its stable of the publishing industry's top artists and writers.

For more information, visit www.bluewaterprod.com.
Posted by JR at 3:24 AM No comments: