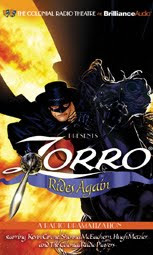 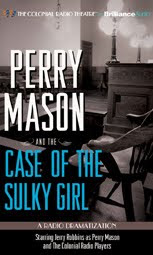 February will be an exciting month with TWO CD's being released (and on download too!).

Both hit the streets on FEB. 15th.

PERRY MASON AND THE CASE OF THE SULKY GIRL is the second book by Erle Stanley Gardner, but it was actually the first one we recorded (on May 21, 2008). We released it for download only on Christmas Day of that year, but decided not to give it to our publisher at that time because we were unhappy with the way we were being brushed under carpets. So, we held on to it, and now BRILLIANCE AUDIO is going to town with the series.

In THE CASE OF THE SULKY GIRL - Set in 1933, an impetuous niece who demands her trust fund be released comes to Perry Mason for help. But it's her boyfriend who needs defending when he is charged with murdering her controlling uncle. CRT Players appearing in this production include Diane Capen (Della Street) J.T. Turner (Paul Drake), Kimberly McClure (Frances Celane), Joseph Zamparelli (Dexter Norton), and Quent Risher (Judge Markham). Also in the cast are Nate Conant, Judson Pierce, Elie Hirschman, Sam Donato, Nancy Curran Willis, Jim Cattell, Tom Lupien, Tom Vittorioso, and Dan Powell.
The show was written by M.J. ELLIOTT from the 1933 novel.

This is NOT the Perry Mason set in 1950's television. Gardner wrote Perry a bit more hard boiled in these early books, and that's how we play them out. It's the 1930's with these stories, before the Miranda Rights! If you're looking for Raymond Burr and the toned down Perry of the 50's, you best stick to TV re-runs. If you want to see how Garner originally wrote them, check out our shows, or read the books :) They are a lot of fun!

Our second release in Feb. will be ZORRO RIDES AGAIN - the sequel to our November release, ZORRO AND THE PIRATE RAIDERS. Has Zorro gone mad? That's the rumor spreading like wildfire through Reina de Los Angeles. For a dazzling swordsman wearing cape and mask is terrorizing innocent citizens. Riding with the night, he leaves the Mark of Zorro on his cruel deeds. Already the governor has placed a price on Zorro's head, dispatching a cutthroat army led by the ruthless Captain Rocha to hunt him down. But Zorro's loyal band and a gallant Indian tribe refuse to believe the foul lie. Still, only one man can expose the truth - and unmask the evil impostor.
Kevin Cirone returns as Don Diego/Zorro, and Jeremy Benson takes on the villainous role of Captain Rocha. Hugh Metzler and Shonna McEachern return as Captain Bardoso and Senorita Lolita, and Sam Donato is back as Sgt. Garcia. Rounding out the cast are CRT Players Shana Dirik, John Pease, Bill Hammond,Pete Milan, Jim Hamilton, Seth Adam Sher, Isaac Bean, J.T. Turner, Joseph Zamparelli, Lucien E.G. Spelman, elie Hirschman.
Produced by Seth Adam Sher, the show has a music score by Jeffrey Gage and was written by yours truly with Deniz Cordell.
Posted by JR at 1:41 PM No comments: