Health nuts are going to feel stupid someday, lying in the hospital dying of nothing.
Posted by JR at 1:44 AM No comments:

Dandelion is here - Something Wicked is on the way! 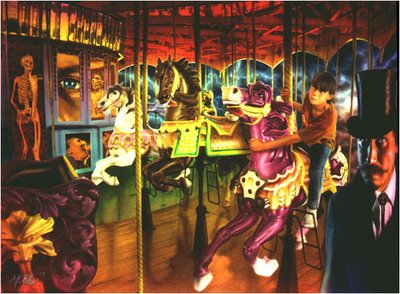 Saw DANDELION WINE on the shelf today at Borders! Looks cool - another amazing cover from the Blackstone design team. So - it's out! Hoping for a home run!

Our next Bradbury release will be his classic SOMETHING WICKED THIS WAY COMES. I am guessing it might be out around the time for summer vacation - but the release date is up to Blackstone. The show is currently in post production, and I hope to have a sneak preview for the cast sometime in February or March!

Started work on a brand new radio series yesterday; got a script finished and I think this will be a fun project; exciting stuff based on a VERY popular book series from many ages ago, but still pretty cool! This will be good as I can edit it as a series for air, and also as a continuous "dramatized book," for CD release; and since there are a ton of these books, it could be a very nice thing indeed if it takes off. I figure if it worked once, it can work again. More on this later. I hope to begin recording it in late April.

What else ... Our WONDERFUL WIZARD OF OZ has been bought by a couple of PBS stations - in Alaska! The show is being heard on 91.9 FM from St. Paul Island in the Pribilofs in the middle of the Bering Sea. I'm not sure where the other station is in AK. I've never been to Alaska, but its cool to think we'll be on the radio there for a broadcast or two! Hard to believe we did that program seven years ago.

And yes, I turned the "comments" off on the blog here, as they were being abused. if you wish to comment, I get to see it first :)

Writing tonight until the sun shows its ugly face.
Posted by JR at 1:18 AM No comments: