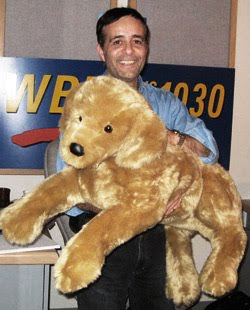 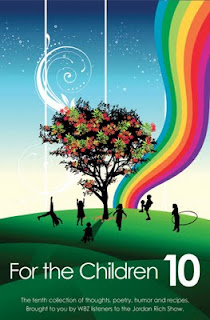 My friend Jordan Rich of WBZ Radio is raising money for the Boston
Childrens Hospital, just as he does every year. For a $20.00 donation
he will send you a wonderful book of poetry, humor, and recipes called FOR THE CHILDREN - now in it's 10th edition!Trust me - you will really enjoy it, and all the proceeds go to the Childrens Hospital. You can also bid on SHERMAN! The biggest stuffed dog I've ever seen! The retail value is $140.00.

THE JORDAN RICH SHOW
Posted by JR at 11:39 PM No comments:

Well, lets see, since November I finished a new script, called PROJECT X. No, that's not the title, but we are keeping it under wraps till we have it recorded. It's gonna be a good one, though!

Right now I am working on the script to Ray Bradbury's THE MARTIAN CHRONICLES. I am quite excited about this one - being able to work with Mr. Bradbury again is wonderful, and I love dramatizing his works. This is my second Bradbury script (The first being THE HALLOWEEN TREE) and I can promise you that CHRONICLES will sound unlike any other CRT show to date.

BUCK ALICE, our production with Walter Koenig (based on his book) is coming together nicely! I LOVE THIS SHOW! Walter is a gifted writer with a sharp wit. It is a black comedy, very funny, yet will make you think in the long run .... there is an underlying element of truth with the characters in this story.

Finally, Colonial Radio Theatre has left Blackstone Audio; and they will no longer carry our titles (Except Dandelion Wine, Something Wicked This Way Comes, The Halloween Tree, which are co-produced with Blackstone); so you can find some great close out deals out there on our CD's!

This will not be the end of the CRT CD releases - not by a long shot. We will be back with another publisher in the Spring, with more retail locations than ever before and download sites! Our previously released titles will be re-issued in the fall of 2010. More on this later.

Right now, I need to return to Mars for some more writing!
Posted by JR at 9:17 AM No comments: