BUCK ALICE IS AVAILABLE FOR PRE-ORDERS 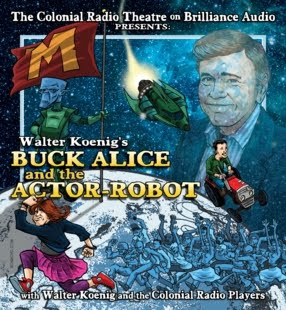 Our production of Walter Koenig's BUCK ALICE AND THE ACTOR-ROBOT will be released by Brilliance Audio on NOV. 15th, 2010! Jeffrey Gage composed and produced the music score, and the production was edited by Jim Hamilton, Seth Adam Sher, and MJ Cogburn.

Walter Koenig heads a cast of over 50 actors in this 6.5 hour long adventure, and it interview recorded during a session break with Boston Radio personality Jordan Rich talking to Walter on how he came to write BUCK ALICE, and his days on Star Trek.

BUCK ALICE AND THE ACTOR-ROBOT on AMAZON

You can hear the trailer at colonialradio.com
Posted by JR at 2:55 AM No comments: