THE BOOMS IN CAPTAIN BLOOD

I just read a users review for CAPTAIN BLOOD - they liked the show, but they made a comment that sometimes the sound effects drown out the voices. That is true! In the battle scenes, there is 'throw away" dialog; meaning dialog that is not terribly important (usually orders being shouted) that I intentionally wanted to be difficult to hear so as to illustrate the intensity of the battle - especially with 40 17th century 12 pounders booming from a ships deck. Some of you have have listened to the show may have had the same thoughts, so I thought I would clarify that it wasn't an editing error, but intentional. Fun show! 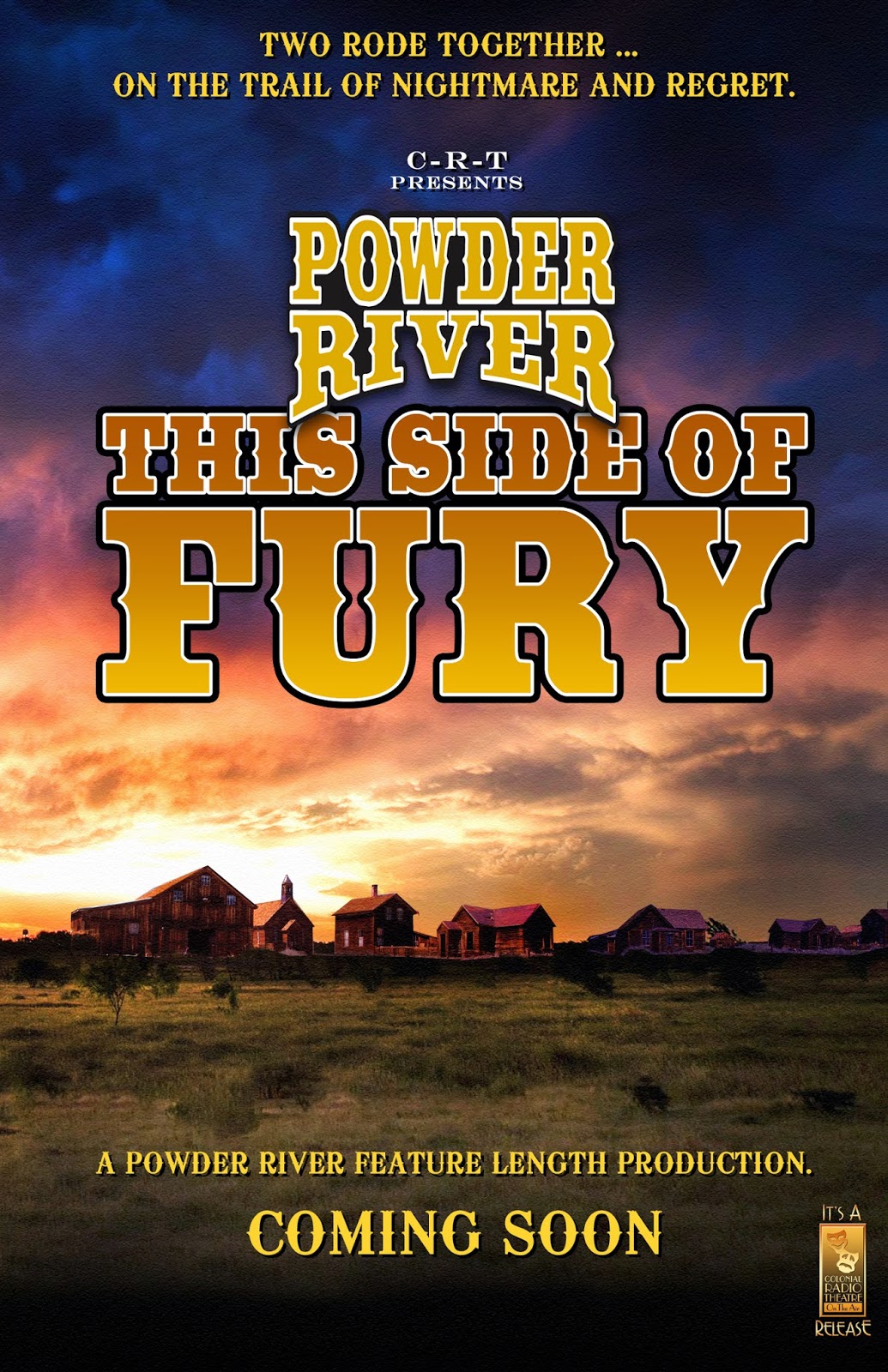 Some of you have seen the poster to an upcoming POWDER RIVER feature, called THIS SIDE OF FURY. I thought I would write a short note on how that came about.
There is a celebrity that I would like to work with as a guest star on POWDER RIVER, and I was going to be meeting with him; however at the last minute I realized that presenting a script would be better than "talk" - so on a Wednesday night (I was meeting him in three days) I got the bright idea that I could write a feature length production in three days. I phoned Exec Producer Mark Vander Berg who thought it was a good move - and also crazy, and then I called Deniz Cordell and told him my plan - he also saw the wisdom of presenting a completed script, and also that it would be a back-breaker to do (A feature length script is about 90 pages). I shanghaied him into service and we kicked around some possible ideas.

I already had the title; "This Side Of Fury," which was planned as the opening episode for Season 10 - however the storyline I had in mind for that episode would not work as feature since it ran off of the Season 9 finale - so I would need to get a new title for that episode, and create a new storyline for the feature length "FURY."  After about an hour, Deniz and I had come up with enough to get started, and off I went!

All through the night new scenes developed and I sent the pages to Deniz for his two cents and ideas - there was not going to be any wiggle room for re-writes at a later date, which is how it usually goes. The sun came up on the next day and I saw the kids getting on the school bus across the street as a new pot of coffee was brewing and the story continued to develop all day long and into the next night.

Plot lines were changed and re-done - a new idea would come into play which meant a new "lead in" would need to be written (and another re-write).  I had a music meeting scheduled with our composer Jeff Gage for Thursday afternoon, which I canceled because I needed to keep going; happily he was okay with the last minute change! At this point I was fifty pages into the script. Deniz would read them and send back thoughts and ideas, and the process continued.

Thursday night came along, and more coffee was brewing. The story had taken a remarkable turn that not only played into the back story of the entire series, but had that "edge" that will shock the fans and at the same time is totally probable and obvious. We both started to get very excited about the story and where it was leading .... but it could not be rushed ... pacing is important.

I was lucky that Deniz was on the other end checking the script not only for typos but for story development; this one did not have the luxury of having a story outline for development and a second draft after completion.

Dawn arrived on Friday morning and the kids got back onto the school bus as the story was plowing forward, and continued to do so all day Friday.

The writing stopped on Friday evening as we had two episodes of ROYALL HOUSE that needed to be recorded. The session took three and a half hours, and soon after that I went into the WBZ studios in Boston to do THE JORDAN RICH SHOW and a 1AM appearance with Flint Dille and David Marconi to promote AGENT 13.  I got back home from the show at around three in the morning, and continued to work on the script until almost eight AM.

It was now Saturday morning.

But we were done.

I delivered the script to the actor who I am hoping will guest star. I have doubts that he will do it - however in the end I think we have one of the more exciting POWDER RIVER adventures to date, and the fact that it was done so quickly, in a 72 hour marathon, makes it all the more special.

We'll record it (even if the guest star we pitched to declines), release it, and see what the PR fans think ... but no matter what the reviews are, it was something that I can't believe we pulled off .....

.... and something I'll never forget and hopefully will never have to do again!
-JR
Posted by JR at 10:15 PM No comments: