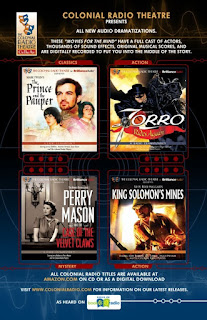 We've just recorded two new episodes of VINCENT PRICE PRESENTS, based on the Bluewater Comic series; "WELCOME TO THE FAMILY OF THE NIGHT," and "THE EFFIGY" are going to be really cool shows I think. The "WELCOME" will be released in Vol. 2 on October 4th. and "EFFIGY" will be released in Vol. 3, which at the moment has no release date set. Tomorrow we do the interview with Victoria Price for the CD Extra's on Vol. 1. At the moment, we have 5 volumes planned for this series, with the first one coming out on June 7th.
In our art department, Ron Boyd is working on the illustrations for DOROTHY AND THE WIZARD IN OZ (July 12) and THE ROAD TO OZ (Sept.13), and Jeff Hayes is working on several titles, including YANKEE CLIPPER (Oct. 11) SLEEPY HOLLOW (Oct 4), A VISIT WITH AESOP (Sept 6). We have photo shoots planned for JACK AND THE BEANSTALK, SNOW WHITE, YANKEE CLIPPER, and SLEEPY HOLLOW.
I remember when we first started, Mark Vander Berg's dad did the cover art for our early releases - like BATTLE ROAD, OLD IRONSIDES, THE PLIMOTH ADVENTURE, ALAMO, and the original GETTYSBURG release in 1999.
Our former publisher did some okay titles (although I hated the Powder River sets)but now, with Ron and Jeff, we have a new look, very slick, and I am blown away all the time with the art they come up with. It's all very exciting.

This week we will be recording another FATHER BROWN episode, THE INVISIBLE MAN. We actually recorded this one back in 2007, but I know we can do better (wasn't thrilled with the edit and wanted to replace a voice or two). This episode will be released in Vol. 2 on August 9th.

We have recorded a total of 16 FATHER BROWN episodes, and they are being released in sets of 4 episodes each. This fall we will begin recording all new episodes and the series will continue - so many more FATHER BROWNS are on the way!
Posted by JR at 11:12 AM No comments: