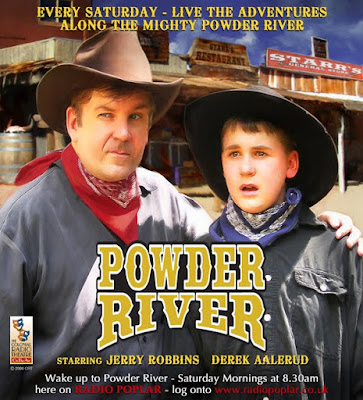 Our western series POWDER RIVER continues its run on Radio Poplar in the UK. Every Saturday morning at 8:30AM.
Posted by JR at 3:20 AM No comments:

Just a week away from Halloween, but plenty of time to get a download or CD of a CRT show that will be fun to listen to with the lights out, maybe a candle and some popcorn.

We are happy to present in the October releases, VINCENT PRICE PRESENTS - VOL. 2. Produced in association with Bluewater Productions and the Estate of Vincent Price, these are four chilling tales that make perfect Halloween listening. The programs in this collection include:

THE ABOMINABLE DR. PHIBES – The Deadly Comedy
The disfigured criminal genius Dr Phibes rises from the dead once again to torment his arch-enemy Scotland Yard Inspector Harry Trout with another macabre murder. Phibes has murdered a famous stage actor in a bizarre and grisly fashion, but this is only the first stage of his twisted plan to rid himself of his enemies and achieve his black heart's deepest desire - immortality for himself and his late wife, Victoria.

WELCOME TO THE FAMILY OF THE NIGHT
Children are kidnapped and taken to a secluded compound where they are given new names and then wait to be "adopted" - by parents who are vampires. A very scary episode of Vincent Price Presents!

RUE THE DAY
A high school English class studies Edgar Allan Poe's macabre masterpiece, "The Murders in the Rue Morgue." Inspired by the horrific tale of a razor-blade-wielding orangutan, the brightest and most insane student in the class uses his secret psychic power to carry out a hideous and unimaginable revenge against his classmates.

THE TELL TALE TAPE
Popular radio show couple Benny and Betty have hit a snag in their off-air relationship. Low ratings and a new romantic interest threaten to put Benny out of a job for good. With the stress building, Benny's inner turmoil finally surfaces in a horrific fashion. Will this be enough to silence the voices in Benny's head for good?

VINCENT PRICE PRESENTS - VOL 2 may be too intesnse for younger listeners. Parental discretion is advised.

THE LEGEND OF SLEEPY HOLLOW CD on AMAZON

THE LEGEND OF SLEEPY HOLLOW DL

YANKEE CLIPPER AND THE ADVENTURE OF THE GOLDEN SPHINX CD

YANKEE CLIPPER AND THE ADVENTURE OF THE GOLDEN SPHINX DL
Posted by JR at 11:19 PM No comments:

Monday we start work on Season 6 of POWDER RIVER. Season 5 is in editing and will start broadcasting in March, but in the meantime I am six scripts into season 6 and looking forward to starting these new episodes, and to welcome some new regulars to the cast. 15 episodes are planned, and production will conclude Dec.19th. I just want to thank all the fans of the show who were a driving force in us continuing the series with Season 5, and I hope that you will enjoy these new adventures in Clearmont Wyoming along the banks of the mighty Powder River.

Some quick updates: Tom Stitzer has completed post production of JEEVES AND THE UNBIDDEN GUEST, and will be starting another project this week.

Theo Mordsey has begun post production on ALLAN QUATERMAIN AND THE LORD OF THE LOCUSTS. This is a feature production, and has a July 9th release date - this is going to be fun, action packed mile a minute summer release!

MJ COGBURN is in post with some new FATHER BROWN episodes that will be released April 13th.

... and those are the projects we can tell you about! There are a few more under the label of PROJECT X that will be announced in the future!
Posted by JR at 10:33 PM No comments: