OUR NEXT RELEASE will be out in the next couple of weeks - a fantasy adventure for the entire family based on Wil Radcliffe's popular book series.

While searching for the lost ruins of an ancient temple, the mad goblin scholar, Bugbear, and his gambler cousin, Tudmire, come into possession of a most peculiar scroll. It is through this scroll that the mystical world of Annwfn and the world of 19th Century humanity are suddenly and inadvertently thrust together. Allying thems...elves with the awkward human stage magician, Martin Manchester, and the fierce warrior woman, Maga, Bugbear and Tudmire must rally the frightened folk of the small town of Willow Prairie against the gathering evil... an evil that has been awakened by the scroll... an evil that hungers for revenge! It is only when Bugbear and Manchester come to realize the wisdom held in an ancient rhyme that they are able to summon the courage to face their hidden foe... "White, gray, and black stones Scattered `cross the board. Now you must unite them To become the Noggle Lord!" 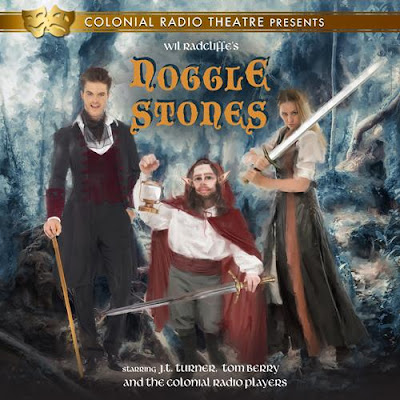