Yesterday we recorded our 25th episode of THE FATHER BROWN MYSTERIES, with J.T. Turner in top form for the afternoon session at the mics - not an easy thing to do since it was a beautiful brisk New England spring day outside. The episode we recorded was THE DAGGER WITH WINGS, with a fantastic script by M.J. Elliott - who has adapted all of our Father Brown productions.  This episode will be included in Vol. 7 of the series, being released in Sept. or Oct.

We have Vol. 6 of THE FATHER BROWN MYSTERIES being released in July! This will be available as download only, at our usual stores (Audible, iTunes, Amazon).  We have been producing this series on and off since 2007, but have recently put it on the fast track and will be releasing new volumes every few months. 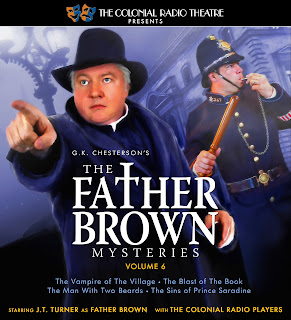