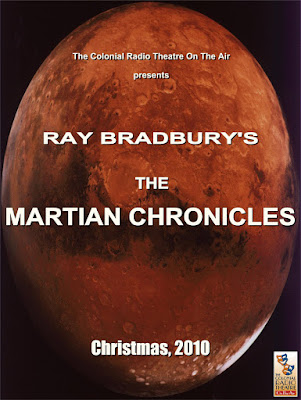 Hope everyone had a nice Thanksgiving holiday. Just finished writing a script for an upcoming production, and now I am starting to write the script for Ray Bradbury's THE MARTIAN CHRONICLES. It's a very exciting project, and as a script writer, quite challenging; especially since we need to record it no later than February so we can get it into post production to meet the release deadline.

BUCK ALICE AND THE ACTOR ROBOT, our production with Walter Koenig, is going to be a blast. Jeff Gage has started the music score and we should see some scenes tracked by the end of the week. CHRIS SNYDER is back in full force at CRT, and he has joined MJ COGBURN with the editing of the production. We expect to have the production finished no later than February.

Have you checked our our newest release, HOODIE? It's a 10min short subject starring the kids who record with CRT. It's a lot of fun, and for a short time it's a free download over at our Lulu.Com store.

SETH ADAM SHER continues to work on TICONDEROGA, our epic 24 episode series set during the French and Indian War. He is on schedule and going great guns (no pun intended), and the project should wrap on time in early February. Episode 1 goes on the air Friday, Dec. 4th on Sirius/XM!

DIBBLE will be returning in an all new special, DIBBLE GOES TO FLORIDA! Not sure when it will be out, but we are hoping for late Spring. It has been recorded and awaits editing.

We had hoped to do a new Christmas Special for our Sirius/XM show this year, but we were very busy with other productions that were getting a little backed up. So, this year we will be repeating our 2008 CRT CHRISTMAS SPECIAL, with my guests J.T. Turner, Diane Capen, and the kids from JERRY AND THE PIRATES, Rob Cattell, Connor Doherty, and Ricky MacDonald. It's a fun 1 hour special, so hope you tune in! It will also be available on Lulu.Com I PROMISE next year we will have an all new special (In fact, I wrote it already! We really tried getting it done this year. See, in order to get it on the air in December and get the music done, we need to record in July!).

I spoke with William Luce tonight, and he told me that BURT REYNOLDS will be doing a staged reading of BARRYMORE in Florida the first week in December. Burt is one of the last true Hollywood icons. I hear the three day run has sold out, but there will be more shows in 2010. It's a great play, and I would LOVE to see Burt in it!! Wishing him all the best for a smash hit fundraiser!!
Posted by JR at 1:42 AM No comments: