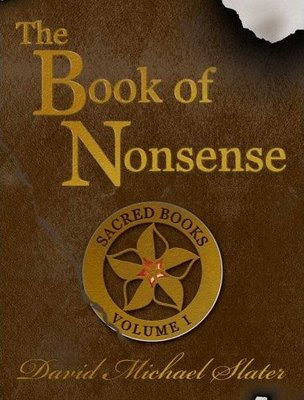 It's on Lulu, and you can hear a preview.

The book is ancient, ravaged and full of utter nonsense. But the moment it
enters Daphna and Dexter's lives, bizarre things begin to happen. Why is their
father, who found the book, suddenly so distant? Is the old man who took it from
him some kind of hypnotist? Why is a giant, red-eyed boy menancing them? And
what does their thirteenth birthday have to do with all this? Daphna and Dexter
can't stand each other, but they'll have to work together to learn the truth
about the Book of Nonsense - before their lives come apart completely.

Review
WITH HIS FIRST FORAY into young-adult fiction, Beaverton middle-school teacher
David Michael Slater demonstrates genuine flair for the genre, and manages to
avoid enough familiar YA fantasy tropes in THE BOOK OF NONSENSE (CBAY
Publishing) to make it a respectable addition to any 12-year-old escapist s
library. Slater s story follows the exploits of twin siblings Dexter and Daphne,
who must decipher a thousand-year-old book of sorcery in order to save
themselves and apparently the rest of the world from malevolent forces. Original
touches lie not in Slater s plotline (heroes triumph, lessons are learned, and
everyone makes it home before suppertime), but in his flawed and realistic
protagonists: a pants-wetting, dyslexic boy and his shy, bookwormish
sister....If your kids have already ripped through the Harry Potter series, The
Golden Compass, and The Spiderwick Chronicles, then spending some time with the
reluctant adventurers in The Book of Nonsense is most definitely a good idea.
--Ben Hogan, Portland Monthly, September 2008

J.T. TURNER is the reader, and Chris Snyder did the editing. Running time is 4
hours.

I am VERY happy to be working once again with the great Ray Bradbury as we produce a dramatization of his iconic work, THE MARTIAN CHRONICLES.

(From Wikipedia:) "The Martian Chronicles is a 1950 science fiction short story collection by Ray Bradbury that chronicles the colonization of Mars by humans fleeing from a troubled and eventually atomically devastated Earth, and the conflict between aboriginal Martians and the new colonists."

This is our fourth production with Mr. Bradbury, and the second in which he is allowing me to write the audio script (the first being THE HALLOWEEN TREE). He will be the script supervisor, so everything in there will be with his approval.

We are planning on recording in January and or February, and a Christmas 2010 release is planned.

More details on the production as we progress.
Posted by JR at 10:51 AM No comments: