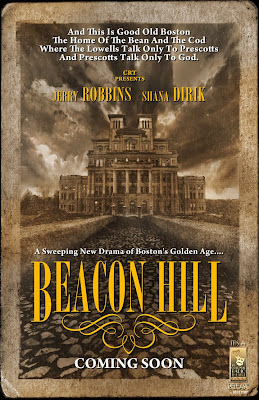 Seth reports that he is on the final scene for our summer release of TOM CORBETT - SPACE CADET! As I mentioned before, this is a very exciting show, and the cast is headed by CRT newcomers Andrew Tighe and Mark McGillivray. Mark Thurner rounds out the lead cast, and they are supported by J.T. Turner and Leigh Berry. We hope to sneak preview the show next weekend, and the release date is May 16th. It will run on our Sirius XM show this summer as well.
Posted by JR at 1:01 AM No comments:

In 2000, we produced dramatizations of the first 5 OZ books by L. Frank Baum; THE WONDERFUL WIZARD OF OZ, THE MARVELOUS LAND OF OZ, OZMA OF OZ, DOROTHY AND THE WIZARD IN OZ, and THE ROAD OZ. They were originally released in a 10-cassette boxed set called THE WONDERFUL WORLD OF OZ. We won the Parents Choice Award for that release, and Rochelle Gorman of the Boston Globe named it as one of the 10 Best Audio Books of the year.
Now, 12 years later, we will be releasing our 6th OZ story as we continue the series with THE EMERALD CITY OF OZ. The release date will be in December. MJ Cogburn is in post production.
We will soon begin work on THE PATCHWORK GIRL OF OZ. The script is completed and it's just a matter of scheduling the session. Shana Dirik will be playing "Scraps," the "Patchwork Girl," and I know she's going to be incredibly funny in the role.
Posted by JR at 12:54 AM No comments: