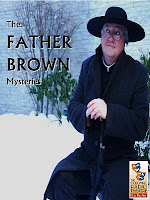 Today we released the second to last episode in our FATHER BROWN series.


From London to Cornwall, then to Italy and France, a short, shabby priest takes on bandits, traitors and killers. Why is he so successful? The reason is that after years spent in the priesthood, Father Brown knows human nature and is not afraid of its dark side. Thus he understands criminal motivation and how to deal with it.

EPISODE 15: THE INSOLUBLE PROBLEM - Father Brown's best friend is a master thief, who's been assigned the task of catching another thief. But first the pair must solve a murder that couldn't possibly have happened.

From the FATHER BROWN short stories by G K Chesterton

Music by KEVIN McLEOD
Posted by JR at 10:31 AM No comments: