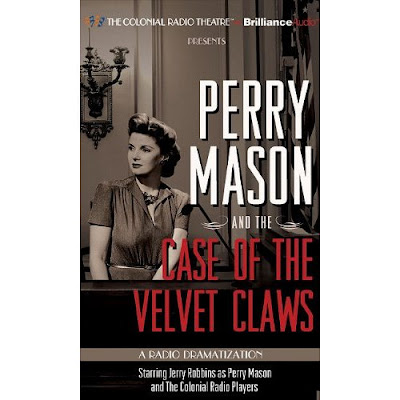 FINALLY we are going to be releasing our PERRY MASON series on CD with a dramatization of the very first novel, THE CASE OF THE VELVET CLAWS. Although we recorded this production in 2008, I wasn't happy with our publisher at the time, and decided to hold off giving it to them for release - I didn't want this series to be buried in thumbnail size on page 35 of a 36 page catalog, not to mention zero publicity or the slightest acknowledgment of its existence - so we put it up for sale on a couple of download sites, thinking that once we had a few more titles they would give it a bigger push. Well, other circumstances came along, and we are now with an awesome publisher who rocks! With that, we will be releasing a new PERRY MASON case every other month, starting with THE CASE OF THE VELVET CLAWS - now for pre-sale on Amazon, with a release date of WED. DEC. 15th.

Here's hoping for a long run with the incredible PERRY MASON stories!
Posted by JR at 12:41 PM No comments: 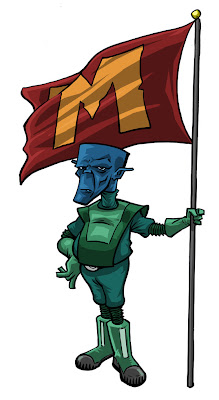 Yes, in just three days the Milliginians,from the planet Milligan, will invade Earth with Walter Koenig's BUCK ALICE AND THE ACTOR ROBOT! You can get the CD and downloads pretty much anywhere, including Amazon, i-tunes, Audio Editions, Audio Bookstand, Audible.Com - and many more. There will also be copies on the shelf in bookstores (if yours doesnt have it, they can order it for you!). This is a picture of the character I play in the show, Imhor. Ron Boyd did the drawing for the poster. Fun stuff!!

We were originally going to run it over seven consecutive nights, but we now will be running on Wednesday nights for seven weeks, starting November 17th at 7pm EST, followed by an encore broadcast (that's the new word for re-runs) each Saturday at 6pm.

Also, we got a schedule change today for THE PRINCE AND THE PAUPER which was to run on Thanksgiving Day. There is going to be a "storytelling marathon" on the station for the entire day, so we will now air on FRIDAY, NOV. 26th. The time will be announced soon. This production will be released on March 16th.

This weekend we'll be adding a new COLONIAL RADIO TALK episode to the website and i-tunes; in this episode I got to speak with SAM DONATO about his time on Powder River, The Dibble Show, Buck Alice, and his years on television in Rex Trailers BOOMTOWN! This is a longer than usual podcast because we were having such a fun time! Sam lives in Florida now, but he was up in Beantown for a week and got to record a VINCENT PRICE PRESENTS episode with us in studio. Good times.

ZORRO hits the streets and BUCK ALICE is in the wings

Our production of ZORRO AND THE PIRATE RAIDERS is now available - you can get it on Amazon, and every other place that sells CD's and downloads. It sold out at Amazon the first day, but new copies should be in in just a couple of days. We're all set with the sequel as well, ZORRO RIDES AGAIN, which will be released FEB.15th.

Walter Koenig's BUCK ALICE AND THE ACTOR ROBOT will be released next Monday - Nov. 15th! This is a different kind of show for Colonial; very much a black comedy, and our second that would carry the rating R if it were a motion picture (the first being BARRYMORE).

It's a fun show, with some really great performances. We had over 50 performers in this epic, headed by Walter Koenig himself, who flew into Boston for the recording sessions.

Sirius XM will run it as a 7 part mini-series, starting the 15th. I'll post the times as soon as I get them.

Walter will be a guest on Maggie Linton's COVER TO COVER show on Nov. 16th at 3pm EST, and then on WBZ radios THE JORDAN RICH SHOW, Nov. 19, at 1AM (10pm Pacific). Both shows are live.