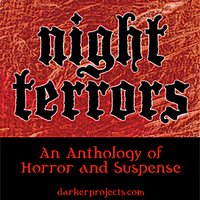 Next week on our XM Radio Show, we are going to do something we've never done before - present someone else's work! Chris Snyder is our new producer here at CRT (he now produces our POWDER RIVER and PHIL BYRNES series), and when not editing at CRT, he is one of the producers over at DARKER PROJECTS (www.darkerprojects.com). Since CRT is very light in the horror department, I asked Chris if we could run some of the NIGHT TERRORS on our show, and he said yes!
Did you ever think you would hear titles like this on the CRT show; "The Bug Doctor," "Last Call," "Voices of the Soul," "The House in the Clock..." and a bunch more. Lots of Halloween fun coming up!

I have heard quite a few productions from DARKER PROJECTS, and they are very good (Check out THE FALCON BANNER). Let me know what you think of NIGHT TERRORS if you catch them!

Our THE LEGEND OF SLEEPY HOLLOW will also have an encore broadcast on XM Radio, and the first airing is on Sunday the 29th at 7am West, 10am East, and 7pm West, and 10pm East. It may run Mon. or Tues. as well, but the schedule isn't out for that week yet. It seems to being well online and in stores (It's up to #3 on Blackstones top 10 bestsellers list).

This weekend, I am trying to finish up a script (our next Ray Bradbury project, and yes - Ray said I could write the script!) and once again I have three POWDER RIVER scripts to do this week, for an Oct. 30th recording session. I hope I get some story ideas soon - my mind sounds like a wind tunnel lately.

Not much else to talk about - OH, had lunch with J.T. today at my favorite Chinese Restaurant. I'm telling you, folks - the best place to get Chinese and Japanese food is the CHINA CUISINE 235 Main Street, North Reading MA (Corner of Main St & North St - Rt. 28) - Bonnie, Victor, or May will greet you at the door, and tell them Jerry sent you! I'm there at LEAST twice a week - and they make WITHOUT QUESTION the best Mai Tai's I've ever had ... and the drinks ain't bad, either! Check it out if you live in the area - its the best!!
Posted by JR at 12:46 AM No comments: 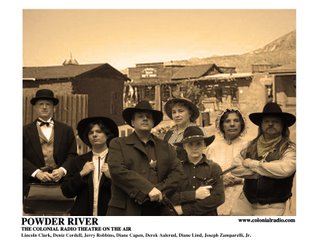 Well, we recorded POWDER RIVER episodes 04-01 and 04-02 last night in a rather crazy off-beat session! I especially remember J.T.'s cell phone playing the INDIANA JONES theme at a moment of dramatic tension (I think this will go down as one of the all-time great CRT bloops)! How actual drama comes out of these sessions I will never know! Three cheers for Derek Aalerud as he is now DRIVING! That's right - I no longer am needed to give him a lift to and from the session! Derek started recording with us when he was 13 I think, so it was very odd seeing him drive off after the session was over ... man, I feel old.

Chris Snyder will continue on as the producer of the series, and I think he did an outstanding job with Season 3 (I haven't edited a PR episode since last year!). Blind since birth, Chris is a testament that a disability should not be an issue in someones ability to do a job, and do it well. In talking extensively with him, you would be surprised how he has been treated in the past - getting accepted to do a job, and then they discover he is blind, and they come up with some excuse why he is no longer needed. That, my friends, is "in your face discrimination" and it infuriates me beyond measure. I know who these folks are that showed him the door - I have heard their work - and to those people I say this ... you would have been much better off with Mr. Snyder as your editor, because he runs circles around what you are churning out now.

I have been introduced to a whole community of very, VERY talented people who are blind, and who work in the audio media as voice talent and editors, and they have all told me stories that hearken to Chris' experiences. I don't get it. I just don't get it. They have the same ability as sighted people - their editing is sharp and skilled and their acting just as good as anyone else who records! I'll be speaking more to this in the blogs ahead. The Colonial Radio Theatre on the Air is very privileged and very proud to have these extraordinary talents join our team.
Posted by JR at 5:23 PM No comments: 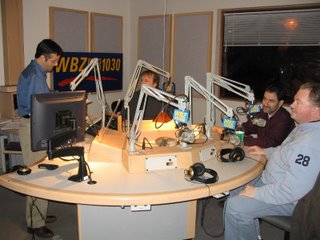 Well, I managed to get two POWDER RIVER scripts finished this week - not the three I had hoped for; but with my dad undergoing two surgeries this week, the stress factor was on max. I hope they're good - they were not easy to write.

On Friday, myself, Jeff Gage and J.T. Turner were guests on Bostons #1 weekend late night talk radio program, THE JORDAN RICH SHOW. We went on to plug DANDELION WINE, CAPTAIN BLOOD and SLEEPY HOLLOW and talk about modern radio theatre. Jordan does a great interview, and we had a blast. J.T. had just come off stage from his 1776, so he came over to join in the late night fun. I did Jordans show for the first time when we were doing CHRISTMAS CAROL at the Gloucester Stage. It was a memorable night because there was a blizzard going on outside. I remember leaving the studio at 2AM and getting home at 5:30am - a trip that should have taken a half hour. This time was a little easier! Thanks again Jordan, for all your support! In the picture we have Jordan at the far left, then me, Jeff and J.T.
Posted by JR at 1:33 AM No comments: