CRT SUMMER BLOCKBUSTERS ARE ON THE WAY 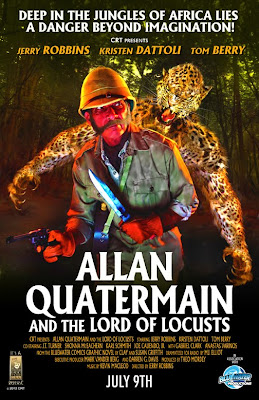 NOW AVAILABLE FOR PRE-ORDERS ON AMAZON

And check out the great comic book series by Clay and Susan Griffith, from Bluewater!

ALLAN QUATERMAIN AND THE LORD OF LOCUSTS
Posted by JR at 7:19 PM No comments:

POWDER RIVER - BACK IN THE SADDLE.

We're underway with POWDER RIVER - SEASON 5, now playing on Sirius XM Radio, every Friday. These are the first new series episodes in 6 years, and the stories pick up five years after the final episode from season 4. WARNING - CONTAINS SPOILERS

Here are the episodes, and their premiere air dates. POWDER RIVER SEASON 5 will be released by Brilliance Audio on CD and DL Dec.5th.

3) THE TWISTED BADGE, Part 3
A gun blazing showdown and Britt and Madden uncover the mystery of the robberies. Air Date: Mar. 23, 2012

5) THOSE WE LEAVE BEHIND Part 1
Britt finds 15 year old Matt Andersen alone on the prairie - the son of an outlaw recently killed in a shoot out. Meanwhile, Jud Corey, whose brother was killed by the outlaw years before, wants his revenge on the boy. Air Date: April 6, 2012

7) INTO THEIR OWN HANDS - Part 1
While riding thru Montana, Chad and Clay are mistaken for outlaws by a posse - made up of kids, with guns. Air Date: April 20, 2012

8) INTO THEIR OWN HANDS - Part 2
The posse catches up to Chad and Clay. Clay is almost killed. In the end, he leaves Clearmont for New York City, to marry Audrey Hunt (from Season 3) Air Date: April 27, 2012

9) DRY GOODS AND HARDWARE
Planning on moving from Clearmont, Millie puts the store up for sale. Air Date: May 4, 2012

12) WHY DAWES IS A BACHELOR.
Millie and Etta try to teach Dawes the art of courting a woman when he has eyes for the owner of the new Millinery Shop – Yolanda. Air Date: May 25, 2012

13) THE GUNMAN
Chad encounters his first crisis when a mob wants to lynch a reformed gunfighter who has stopped in Clearmont on the way to his daughters wedding. Air Date: June 1, 2012