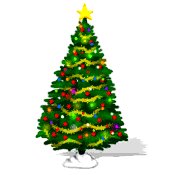 I hope everyone has a VERY Merry Christmas, and an even BETTER New Year!
Posted by JR at 8:34 PM No comments:

So - here's the deal ... on radio I am pretty much MR. CHRISTMAS; with our Dickens Christmas CD set on sale in stores and online, Cricket on the Hearth, Seven Poor Travellers, The Chimes playing all next week on XM, Dibble Christmas shows coast to coast and stations here and there ... the OZ show that has Santa in it, THE ROAD TO OZ plays on Christmas Eve, a Christmas show playing Off-Broadway ...

and I dont even have a tree, nor have I done ANY shopping. Not a window candle to be found.

Never used to be like that. So, I gotta sit here and ask myself why. Well, I know there are a few reasons, but still - I need to stop this. It's been five years since I put a tree up!

The family next door left a Christmas card / photo in the mailbox, which was very nice of them. Great kids! The nine year old wants to write a book about mini-bikes. Last I heard he had nine pages! Now, for a nine year old, I think that's pretty good!

Dibble got a rather nasty review from a failed playwrite - turned - critic. I mean, this review wasn't even a review - it was more like "I hate this script, Jerry Robbins can't write, the jokes suck, and it's nothing but a bomb" kinda review. He even gave away the entire plot / gag. What a guy!

Turns out David Finkle (thats his name, rymes with wrinkle) is a flopola who penned a play that closed after only (ahem) TWO PERFORMANCES in 1968, and then he tried again in 1972 and - yep, you guessed it - EL FLOP-O in seven performances. So, what we have is a bitter "if I bomb, you bomb" playwrite turned critic who seems to go after the script writing in all his "reviews." So I consider it an honor to join the ranks of shows like MEET ME IN ST. LOUIS who have been slapped by his bitterness. But, it must be horrible to be a failed playwrite who only saw a total of 9 performances before REAL critics told him to get a day job (I wont tell David that Dibble has already breezed past his performance record).

I feel sorry for people like him. A once "promising" playwrite who got a chance, bombed like the Hindenburg, and spends the rest of life trying to do the same to others. Now, I can take a bad review, but this wasn't a review; it was a rant from a failed man.
You cant touch ME, David, but nice try!
Posted by JR at 12:51 AM 3 comments: