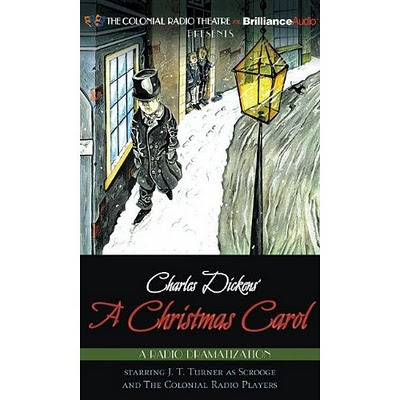 We've done A LOT of recording in October, 10 episodes of a new PROJECT-X series, 4 episodes of VINCENT PRICE PRESENTS, and a segment of a new PROJECT X. Looking forward to next weeks release of A CHRISTMAS CAROL from Brilliance. We did the show six years ago, but its only CD release was in a set of 4 Dickens stories; so this is the first time it has been out on its own. It's priced great for mass retail so we're hoping it does good biz. J.T. Turner is our Scrooge! Those of you in the Boston area can see J.T. on stage in the role of Fezziwig, in the spectacular production of A CHRISTMAS CAROL at the NORTH SHORE MUSIC THEATER in Beverly, opening the first week in December for 28 performances.

Jeff Hayes and Ron Boyd continue to produce the best cover art we've ever had! Right now Jeff is working on the cover art for POWDER RIVER AND THE MOUNTAIN OF GOLD that will be released on April 19th, and Ron is illustrating an amazing cover for THE WONDERFUL WIZARD OF OZ that hits the stores on Jan. 15th. These two artists are really amazing and at some point we will make prints of their art available on our website.

SPEAKING OF WEBSITES - we will be updating ours soon. It's on the list of things to do. The original design of the site was done by Sean Timberlake, 15 years ago. It was less crowded then as we had about 10 titles at the time. Now we have over 300 and we really need to make it easier to find them; so yep, we're working on it!

ALL READY FOR HALLOWEEN? I went to "Spookyworld" with my friend Curly a couple of weeks back, and it sure was SCARY! I think it's rated one of the top 10 horror theme parks in the county. Lots of fun.

As I mentioned in my last post, this weekend we air two episodes of our new series,
VINCENT PRICE PRESENTS on SIRIUS XM. The CD release is not until the spring, but how could we let Halloween sneak by without airing a couple of episodes?

LAST but not least, we have created a youtube channel for Dibble. We will be youtubing episodes of THE NEW DIBBLE SHOW on rotation; the shows won't be up for all time - just a week or two. You can see the channel at

First up is Dibble's Halloween Show from 2005.

My Maple tree hasn't changed color yet!
What's up with that?