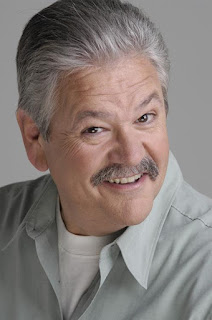 I am deeply saddened to tell you that my dear friend, one of my very best friends, Sam Donato, passed away Nov. 30th after a courageous battle with cancer. Why courageous? Because in all that time, he never once complained; he would talk of the great life he had, crack jokes, and displayed optimism that was off the charts. I am certain he had his moments – but he never showed that side to his friends.
Sam joined CRT in 2002, and I believe his first recordings with us were in THE NEW DIBBLE SHOW, which we started taping in January of 2003. Sam played the daffy Mayor Otis Keating, and played it to the hilt in 55 episodes.
From there he went into POWDER RIVER as Sheriff Clem Wilkins, and YANKEE CLIPPER as Angus Reed.
He moved to Florida in 2004, and continued to record with us via his home recording set-up (which matched the quality of our mics perfectly for a seamless edit). He appeared in all of our various series, JARREM LEE, BURGLARS’ CLUB, TOM SWIFT, VINCENT PRICE PRESENTS, ANDY SMITHSON, and his own series, THE ADVENTURES OF SGT. BILLY & CORP. SAM with BOOMTOWN alumni, Bill O’Brien.
While his character of Sheriff Wilkins was written out of the show after his move to Florida, Sam came back in season 3 playing an outlaw against TV star Rex Trailer (BOOMTOWN) in the two-parter RETURN OF THE LEGEND. Sam was featured on Rex’s BOOMTOWN TV show for many years, and each Christmas would climb out of Rex’s helicopter as Santa Claus to the delight of thousands of viewers. I was one of them.
Sam excelled as Santa, portraying him in a stage show at the Nickelodeon theme park in FL, as well as at Walt Disney World, and with CRT in DIBBLE’S CHRISTMAS SPECIAL, and also in JIMMY AND THE STAR ANGEL.
He was the announcer of POWDER RIVER from Season 5 thru Season 11, part 1.
For many years he was a member of one of Boston’s top bands, THE CLASS OF 66. Sam was an excellent guitarist.
On stage he starred as Tevya in FIDDLER ON THE ROOF, Doolittle in MY FAIR LADY, Pellinore in CAMELOT, Mr. Lundee in BRIGADOON, and a host of others. He also appeared as the Sheriff in the movie "Adventure Scouts."
I’m going to miss Sam. He would come to a recording session if I had a tiny part that was not worth the drive – but he was here. He never came to a session in a bad mood. He was always upbeat and happy – even at this last session when it was obvious he was in discomfort and needed to do his lines sitting down – he never complained and while he struggled at times with some of the lines, he turned in a wonderful performance. I know the entire cast that night was impressed by this.
You couldn’t help but respect his professionalism. He showed up, had a lot of laughs, and got the job done. He did the same thing two weeks later when we had the music recording session for "Sgt. Billy and Corp. Sam."
That was his last time with us.
More than the actor, I’m going to miss him as a friend. Did we hang out much? Not really. We had dinner or lunch at Kitty’s a couple of times, and that was about it. But we spoke on the phone a lot. Whether I called him or he called me, on the other end of the line there would be a booming “MEEE-STA ROB-BINS!” or a “HELLLL-OOOO” that always sounded like something great was going on – just full of upbeat happiness that instantly put things on a happy track.
He still answered the phone that way for our last conversation. After the initial greeting, I could hear the weakness in his voice… but we talked about old TV shows, radio, more old TV shows… a few lines were about his illness – but then back to fun things… old shows and the memories that go with them.
Through his work with Colonial, Sam appeared in 159 productions as an actor, and in 109 productions as an announcer.
It’s quite a legacy. And in the years to come, new listeners will discover his great talent, because Sheriff Wilkins will always be in the saddle on an adventure with Britt MacMasters.
Mayor Keating will always be arguing and pulling fast ones on Dibble.
Ben will always be helping little Toby Tyler learn the ways of the circus.
Sgt. Garcia will always be fencing with Zorro.
And Corp. Sam will always be in search of that missing payroll box with his pal of fifty years, Sgt. Billy.
You see, as long as there are people listening… his adventure is really just beginning.
JR 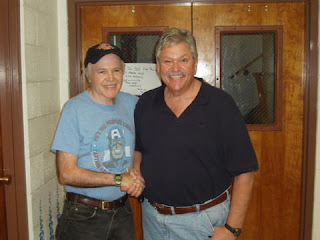 Star Trek's WALTER KOENIG and SAM DONATO at the recording session for CRT's
BUCK ALICE AND THE ACTOR ROBOT. Aug. 2008. 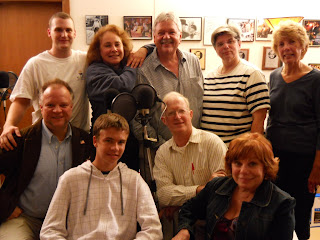